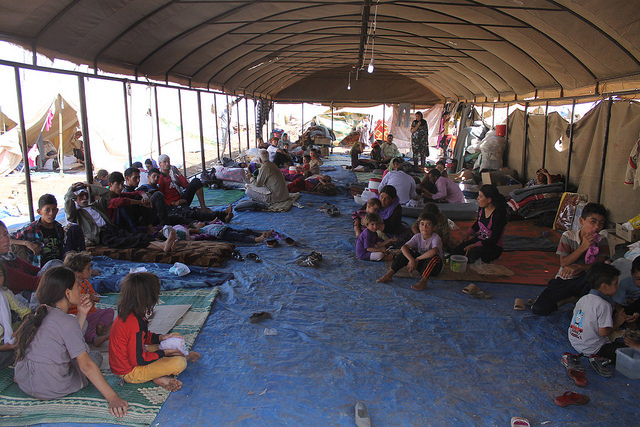 As hundreds of thousands of Iraqis flee their homes and temporary shelters because of intense fighting, the global humanitarian agency Mercy Corps seeks to ensure that all civilians, regardless of age, gender or religious affiliation, are permitted to find safe haven.

Since heavy fighting erupted in June, an estimated 850,000 Iraqis have abandoned their homes in search of safety. Large communities of displaced civilians are dealing with acute shortages of water, shelter and proper hygiene facilities – exacerbated by fuel shortages and extreme summer heat.

In the past two months, Mercy Corps has already reached more than 20,000 people with desperately needed emergency supplies.

“The sudden, large displacement of people has overwhelmed more stable regions of the country,” says Steve Claborne, Iraq country director for Mercy Corps. “Official camps for internally displaced people are few and far between, so many families are taking shelter wherever they can: in schools, abandoned buildings and tents.”

Without clean water and sanitation facilities, the risk of disease outbreaks is high. To help families stay healthy, Mercy Corps has already distributed 4,000 hygiene kits to displaced families, and will continue to distribute these and other essential supplies such as tents, dry food rations and kitchen sets to civilians in need.

The hygiene kits contain items such as soap, towels, toothpaste and toothbrushes, laundry detergent and a washing basin.

“With tens of thousands of families on the move, humanitarian needs in Iraq have reached a critical point” says Claborne.  “The operational environment is extremely challenging and unpredictable, but we remain committed to helping affected communities survive, recover and eventually rebuild from this latest crisis.”