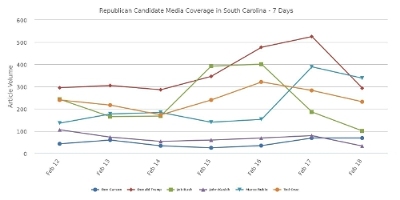 The stakes are  high.

The South Carolina primary will either boost or blow a candidate’s shot at the presidential nomination. Historically, South Carolina has been a fierce battleground state for the Republican Party. The winner of the state primary has always become the GOP’s eventual nominee, with one lone exception: the 2012 race in which Mitt Romney took second place behind Newt Gingrich, but went on to secure the Republican presidential  nomination.

Donald Trump currently leads the Republican race in South Carolina by a 13 percent margin (at press time) with Ted Cruz closing in. But election polls – which can change day by day and hour by hour – only tell part of the story. If media coverage is any indication,Jeb Bush and Marco Rubio could give Trump and Cruz a run for their  money.

Despite their “middle of the pack” polling numbers thus far, Bush and Rubio are quickly becoming media darlings in the “Smiling Faces, Beautiful Places” state. The coverage doesn’t lie: Even as Cruz has gained ground on Trump in the polls, Bush and Rubio have secured significant media attention this week in South  Carolina.

Bush’s rising media coverage comes as he focuses much of his time, energy and resources throughout the state. He continues to attend town hall meetings and rallies across South Carolina, and has had his mother, Barbara, and brother, former President George W. Bush, campaigning on his behalf in hopes of securing votes ahead of the  primary.

Rubio’s increase is likely from the endorsement he received Wednesday from South Carolina Governor, Nikki Haley. Newsdesk analysis shows a dramatic spike in coverage when the announcement was made on Feb.  17.

But does the amount of media coverage for each candidate correspond with how they are doing in the polls in South Carolina? Yes – sort  of.

As shown by this Share of Voice breakdown (the percentage of articles written about one candidate vs. the others), all candidates rank in the same position in the media as they do in the polls – with one exception. Bush edged out Rubio in the amount of total media coverage received over the last seven days, despite ranking behind him – sometimes by nearly 10 points – in all major  polls.

Does this media coverage/polling comparison show promise for Bush’s campaign? What about Rubio? We’ll find out for sure on Saturday, but this analysis provides some interesting insight into the media coverage of our presidential  election.

For more insights on the intersection of media and the presidential election, follow the LexisNexis Biz Blog or connect on  Twitter@LexisNexisBiz.