Twenty-nine holiday-makers from Britain as well as tourists from Germany, Belgium, Portugal and Russia made up the thirty-eight people killed in an ISIS inspired terror attack at a popular beach resort in Sousse, Tunisia. The lone gunman, Tunisian Seifeddine Rezgui, emerged with little warning that he was about to become an assassin in behalf of the so-called Islamic  State.

Twenty-three year old Rezgui was a master’s degree student in electrical engineering and followed ISIS instructions to either make “hijra,” that is come and join the jihad in Iraq and Syria, or stay at home and bring the battlefield to the so-called “infidels.” Unlike over three thousand of his Tunisian “brothers” who have gone to fight jihad in Syria and Iraq, Rezgui opted for the latter. Rezgui’s apparent “lone wolf” action, is for Britons, the worst act of terrorism since the July 7 bombings in London, when the metro was simultaneously attacked in four different locations in 2005 by homegrown terrorists. Now hailed by ISIS as a “soldier of the caliphate,” Rezgui gave few, but important, signs of his  intent.[1]

A “clean-skin” terrorist—that is one with no prior criminal record—is often times the most difficult for law enforcement to detect prior to an attack. Rezgui it turns out traveled to Libya for training but was not known by the police to hold extremist views nor did he have a criminal record. His family also expressed shock that he had carried out his  attack.

Rezgui did however, make his views known on what is believed to be his Facebook page where he had posted in support of ISIS since the beginning of last year. Having apparently radicalized at university, the gunman apparently was seduced into ISIS, as have many other young people by claims of a caliphate and new utopian world order in which perceived personal and global injustices would be  addressed.

How does ISIS achieve this power of persuasion over others to convince them to carry out violence that often ends in destroying or ending their own lives as  well?

In the case of Rezgui, his Facebook page gives some hints. For instance his last posting in January of 2015 states, “May God take me out of this unjust world and perish its people and make them suffer. They just remember you when they die. ” Clearly, Rezgui felt he would achieve some kind of immortality by enacting terrorism and address what he apparently believed were global injustices. His actions make clear that he bought on to the ISIS idea that killing and “martyrdom” was the way to achieve that  impact.

The narrative that Islam, Islamic people and lands are under attack by the West has long been a narrative with al Qaeda and is now being furthered by ISIS. And it’s a narrative that finds footholds with many who radicalize by interacting with slick ISIS marketing materials and after being drawn in by Tweets, blogs, text messages and Skype  conversations.

The motivations for joining ISIS vary by person and context but the essential elements of the lethal cocktail of terrorism remain the same. There is 1) the group that frames a problem and it’s solution in violent terms; 2) its ideology that wrongly argues that targeting innocent civilians is justified for the cause; 3) some level of social support which these days often comes via the Internet versus face-to-face interactions and lastly 4) the motivations and vulnerabilities of the individuals that link up with the previous three ingredients. In some cases the individual motivations and vulnerabilities are the desire to belong, for adventure, romance, money, status, to escape a dreary life, anger over social injustices such as discrimination or marginalization, secondary traumatization from viewing atrocities in person or by video and photos of conflict zones, a desire for revenge, trauma, social contagion inside a group, and host of other issues that all can interact successfully with exposure to a terrorist group and its virulent  ideology.[2]

Shannon Conley, an American girl for instance converted to Islam and then searched the Internet to learn how to live her new Islamic life. She, like many, found the online videos of Anwar al-Awlaki, a Yemeni American imam who turned against the U.S. and eloquently preached the requirement (according to him) for all Muslims to constantly engage in jihad either by making hijra or staying at home and acting in place. Al-Awlaki was droned by the Americans in 2011 but manages to live on inspiring beyond his grave, via the Internet. He has been implicated as a terrorist instigator and ideologue in nearly every Western ISIS or al-Qaeda related plot in recent years—including London’s 7-7 attacks, the Canadian Toronto 18, the Christmas underwear bomber and U.S. Major Nidal Hasan’s active shooter  attack.

Via social media, chat and Skype sessions with ISIS supporters, Conley (whose case inspired my new book Bride of ISIS) progressed into believing the U.S. should be punished for engaging in airstrikes in Iraq. She briefly contemplated carrying out her own “lone wolf” attack—carrying out a VIP attack inside the U.S. She, like many young women that endorse ISIS, was discovered by a Tunisian ISIS fighter who talked with her over Skype and eventually proposed that she make hijra and come to Syria to marry him. Conley intended to do so but was arrested by U.S. authorities as she departed to travel to  Syria.[3]

It should be noted that  Rezgui, Conley and nearly all of those that join ISIS today endorsed ISIS ideology, ideologues or actual ISIS sites on their Facebook or other social media accounts and posted about their new extremist beliefs. This indicates how important identity is to those who begin to take on the ISIS worldview. Rezgui for instance, posted on his Facebook page, “If jihad is a crime, the world shall know that I’m a criminal.” Their new beliefs are so important to them that they feel a need to declare it on social media—a fact that makes it possible to identify at least some of  them.

Jeff Weyers, a policeman in Canada (and consultant at BRABO)[4] did just that. He tracked English speaking Facebook and Twitter users who endorsed terrorist groups. Gleaning what he could about them, he then used the Inventory of Vulnerable Persons guidance tool[5] to rate how likely they were to becoming violent extremists. Weyers found that 300 of his sample of 3000 entries from around the world fell into the dangerous category. He alerted law enforcement in the various countries involved. When investigations were made, indeed explosives, guns and nefarious plots were discovered and arrests were  made.

Clearly, nowadays many of those who enter the terrorist trajectory and follow ISIS leave clear tracks on social media and can be tracked either by researchers like Weyers or even by automated computer programs to spit out to law enforcement cases that may warrant further investigation—before a terrorist plot is  enacted.

Anne Speckhard, Ph.D. is Adjunct Associate Professor of Psychiatry at Georgetown University in the School of Medicine and of Security Studies in the School of Foreign Service. She is author of Talking to Terrorists, Bride of ISIS and coauthor of Undercover Jihadi. She was responsible for designing the psychological and Islamic challenge aspects of the Detainee Rehabilitation Program in Iraq to be applied to 20,000 detainees and 800 juveniles.  She also has interviewed over 400 terrorists, their family members and supporters in various parts of the world including Gaza, the West Bank, Chechnya, Iraq, Jordan and many countries in  Europe. 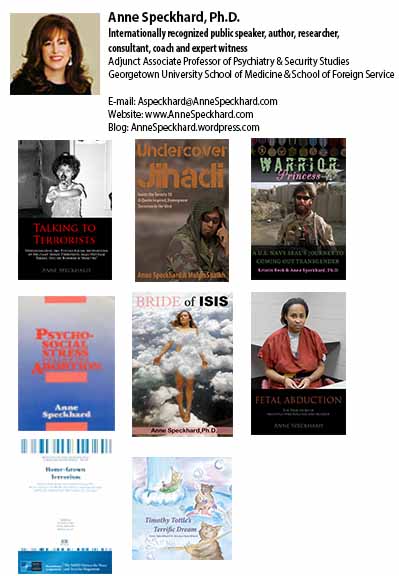