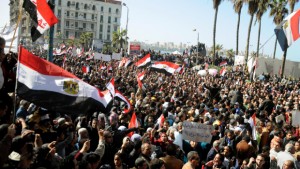 Coptic Solidarity congratulates the Egyptian people for successfully ousting the totalitarian regime of President Morsi. General Abdul Fattah Al-Sisi, just announced that the Chief Justice of the Constitutional Court would take the powers of the presidency and has temporarily suspended the Egyptian Constitution. The military intentionally handed over power to not replicate their mistake of assuming power after Mubarak was deposed.

Some commentators and government officials in the US have downplayed the protests as undemocratic. Indeed, the Obama Administration is widely seen as supportive of the Muslim Brotherhood for their verbal and financial support of Morsi. Comments by US Ambassador Anne Patterson encouraging Copts to not participate in the recent protests have been widely publicized.  Combined, these actions and statements indicate a double standard to Egyptians. Obama’s policy has sent the message that democracy and human rights are good for Americans, but Egyptians do not deserve them.

Coptic Solidarity President, Adel Guindy states, “We reject the notion that the Egyptian Army is staging a coup d’état. It is simply an unavoidable reaction to the People’s overwhelming will.”

While Americans celebrate their independence this 4th of July, Egyptians on the other side of the world have once again acted to achieve theirs. An estimated 12-to-17 million citizens, in what is probably the largest political demonstration in history, demanded a return to the original purpose of the January 2011 revolution.

Coptic Solidarity remains concerned about potential targeting of Copts and other minorities during this transition period. Islamists took advantage of the last transition to perpetrate unprecedented attacks against Coptic Christians in modern times.

As we have seen in recent cases, democratic uprisings can be the most dangerous time for unprotected minorities. We hope for a peaceful process and call upon the Egyptian authorities to do everything in their power to protect Egyptian minorities and bring justice to any perpetrators of violence.