By Tom Thurlow, Special for US Daily Review.

Admittedly, I thought Eric Holder was damaged goods before he was nominated to be President Obama’s Attorney General.  Recall that in January, 2001, President Bill Clinton was on his way out of office and suddenly a swarm of presidential pardons was announced, including pardons for two fugitives, 24 drug dealers, a child molester, and the president’s ne’er-do-well brother, Roger Clinton.

VIDEO: Kevin Price of the Price of Business Interviews Thurlow About this Article

The pardons for the fugitives were especially aggravating: a presidential pardon is supposed to be considered after the judicial system has run its course and for various reasons the defendant is seen as unfairly treated.  In the case of a fugitive, the defendant has so far escaped even an arrest, much less a conviction, so a pardon while evading justice is pretty ridiculous, or “disgraceful,” as former president Jimmy Carter said at the time. 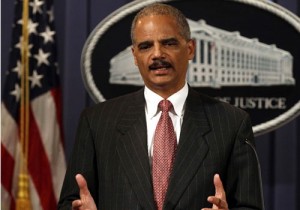 Holder has a history of making law enforcement a "risky business."

Then-Deputy Attorney General Eric Holder was the legal advisor for those fugitive pardons.  Of course, it was President Clinton who actually granted the pardons, but still.

It was also doubted that the Justice Department had been informed of the developments of the fugitive pardons, and apparently some financial contributions had been made.  By the time the smoke cleared, Eric Holder admitted that he had made mistakes and that he should have been more forthcoming with other attorneys at the Justice Department and well, this will cause him to be a better Attorney General.  Promise.

This was a couple years after a different pardon problem.  In 1999 Holder had advised President Clinton in the commutations of several convicted Puerto Rican terrorists.  People had actually been killed and the perpetrators had been sentenced to prison.  The prosecutors and victims’ families opposed any idea of a pardon.

But no matter.  At the time, Hillary Clinton was running for senator from New York, and it was probably just a coincidence that Hillary Clinton’s campaign would benefit from some outreach to the local Puerto Rican community.

So when President-elect Barack Obama nominated Eric Holder to be his Attorney General, eye-brows in the Senate were raised, but the usual deference was given to the new president and Holder was confirmed.  Now, there will be a June 20 contempt vote set in the House of Representatives because of some subpoenaed documents that were not delivered, but the House should instead be voting on the impeachment of Eric Holder.

As could have been predicted, Holder’s tenure as Attorney General has been a rocky one.  One case that greeted him was the New Black Panther voter intimidation case.  During the 2008 election, members of the New Black Panther Party in Philadelphia were caught on video intimidating white voters.  After an easy victory in court, all that was left to do was to sentence the defendants.  Instead, the Holder Justice Department dismissed the case.

An outraged prosecutor who left the Justice Department, Christian Adams, has confirmed what people suspected, which was that the handling of this case was anything but race-neutral.    Holder admitted as much when he said that “his people” had a different experience of voter intimidation.

The Holder Justice Department has also blocked various voter ID laws from going into effect.  In both Texas and in South Carolina, voters will not need identification to vote despite popular and judicial support for these laws.

Is there a non-political reason to block such a law?  Holder insists that these laws discourage minorities from voting, but no one believes him.  In fact, Senator John McCain has declared that with Eric Holder, “there is no credibility.”

But so far these have been policy disagreements, not “high crimes or misdemeanors” that would warrant impeachment.  Enter the “Fast and Furious” scandal, which was a truly bone-headed plan to have federal agents allow assault weapons into Mexico to be traced to the drug cartels there.  The result was a disaster: hundreds of Mexicans, an American border patrol agent and an immigration agent have been killed by guns that were “walked” into Mexico.

Predictably, the Justice Department has distanced itself from this mess, and in a congressional hearing on May 3, 2011, Holder testified that he first heard of the scheme “within the past few weeks.”  Now e-mails have been released that show Holder knew about Fast and Furious almost a year earlier.  While the issue of when he heard about it might not be that critical in the grand scheme of things, he clearly lied in his testimony to Congress, an impeachable offense.

Now 129 House members have called for Holder to quit, and the list keeps growing.

One last reason to impeach Eric Holder — and this is just me — is the possibility of yet another controversy involving pardons, this time by a soon-to-be-leaving President Obama.  Assuming he loses his bid for re-election, President Obama will probably be in a pretty foul mood, and he may be tempted to pardon any number of people.  He will probably have Eric Holder advising him on the pardons.

“But wait,” you might ask, “isn’t that penalizing Holder for something that he has not yet done – almost a pre-emptive reason for impeachment?”  OK, fair enough, in the traditional sense of time progression, you may have a point.  But wasn’t Holder’s boss, President Obama, awarded the Nobel Peace Prize only a few months into his presidency, in anticipation of all the peaceful things he was about to accomplish?  If you ask me, impeaching Eric Holder in part because of something he might do in the future has a certain poetic justice to it.  Waiting for a misdeed to be committed before punishing the defendant is over-rated.  A few years ago Tom Cruise made a great movie that dealt with arrests and prosecutions for future crimes.  Makes sense to me.

But seriously, it is time for the fun and games at the Justice Department to end.  It is time to impeach Attorney General Eric Holder.

Tom Thurlow is an attorney who practices law in the San Francisco Bay Area and manages the blog napawhinecountry.com.  He lives in Napa County with his wife Martina and daughter Rachel.  He can be followed on Facebook at Napa Whine Country and on Twitter at Napawhinemaster.