A new study by astronomers at NASA, Johns Hopkins University and the Rochester Institute of Technology confirms long-held suspicions about how stellar-mass black holes produce their highest-energy light.

“Our work traces the complex motions, particle interactions and turbulent magnetic fields in billion-degree gas on the threshold of a black hole, one of the most extreme physical environments in the universe,” said lead researcher Jeremy Schnittman, an astrophysicist at NASA’s Goddard Space Flight Center in Greenbelt, Md.

By analyzing a supercomputer simulation of gas flowing into a black hole, the team finds they can reproduce a range of important X-ray features long observed in active black holes.

Gas falling toward a black hole initially orbits around it and then accumulates into a flattened disk. The gas stored in this disk gradually spirals inward and becomes greatly compressed and heated as it nears the center. Ultimately reaching temperatures up to 20 million degrees Fahrenheit (12 million C) – some 2,000 times hotter than the sun’s surface — the gas shines brightly in low-energy, or soft, X-rays.

For more than 40 years, however, observations have shown that black holes also produce considerable amounts of “hard” X-rays, light with energy tens to hundreds of times greater than soft X-rays. This higher-energy light implies the presence of correspondingly hotter gas, with temperatures reaching billions of degrees.

The new study bridges the gap between theory and observation, demonstrating that both hard and soft X-rays inevitably arise from gas spiraling toward a black hole.

Working with Julian Krolik, a professor at Johns Hopkins University in Baltimore, and Scott Noble, a research scientist at theRochester Institute of Technology in Rochester, N.Y., Schnittman developed a process for modeling the inner region of a black hole’s accretion disk, tracking the emission and movement of X-rays, and comparing the results to observations of real black holes.

Noble developed a computer simulation solving all of the equations governing the complex motion of inflowing gas and its associated magnetic fields near an accreting black hole. The rising temperature, density and speed of the infalling gas dramatically amplify magnetic fields threading through the disk, which then exert additional influence on the gas. 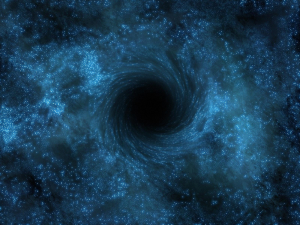 The result is a turbulent froth orbiting the black hole at speeds approaching the speed of light. The calculations simultaneously tracked the fluid, electrical and magnetic properties of the gas while also taking into account Einstein’s theory of relativity.

Running on the Ranger supercomputer at the Texas Advanced Computing Center located at the University of Texas in Austin, Noble’s simulation used 960 of Ranger’s nearly 63,000 central processing units and took 27 days to complete.

Over the years, improved X-ray observations provided mounting evidence that hard X-rays originated in a hot, tenuous corona above the disk, a structure analogous to the hot corona that surrounds the sun.

“Astronomers also expected that the disk supported strong magnetic fields and hoped that these fields might bubble up out of it, creating the corona,” Noble explained. “But no one knew for sure if this really happened and, if it did, whether the X-rays produced would match what we observe.”

Using the data generated by Noble’s simulation, Schnittman and Krolik developed tools to track how X-rays were emitted, absorbed, and scattered throughout both the accretion disk and the corona region. Combined, they demonstrate for the first time a direct connection between magnetic turbulence in the disk, the formation of a billion-degree corona, and the production of hard X-rays around an actively “feeding” black hole.

A paper reporting the findings was published in the June 1 edition of The Astrophysical Journal.

In the corona, electrons and other particles move at appreciable fractions of the speed of light. When a low-energy X-ray from the disk travels through this region, it may collide with one of the fast-moving particles. The impact greatly increases the X-ray’s energy through a process known as inverse Compton scattering.

“Black holes are truly exotic, with extraordinarily high temperatures, incredibly rapid motions and gravity exhibiting the full weirdness of general relativity,” Krolik said. “But our calculations show we can understand a lot about them using only standard physics principles.”

The study was based on a non-rotating black hole. The researchers are extending the results to spinning black holes, where rotation pulls the inner edge of the disk further inward and conditions become even more extreme. They also plan a detailed comparison of their results to the wealth of X-ray observations now archived by NASA and other institutions.

Black holes are the densest objects known. Stellar-mass black holes form when massive stars run out of fuel and collapse, crushing up to 20 times the sun’s mass into compact objects less than 75 miles (120 kilometers) wide.

To see a video related to this release, please visit: