“I’m not buying in to the proposition that the nation’s construction industry will recover in 2013,” said Basu. “What we have right now is an utter lack of confidence in the economy, and confidence represents a centrally important requirement for construction spending growth. 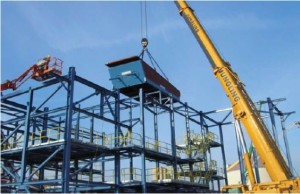 “We have capital and profitability in the broader economy, and there is money sitting in the banks,” Basu said. “But many decision-makers have adopted a wait-and-see attitude until the sea of uncertainty that faces us recedes. This uncertainty includes confusion regarding the future path of federal spending, tax rates, the financial chaos in Europe and our own 2012 elections.

“No sector of the economy during the recession has lost more jobs than the construction industry, with nearly five million jobs lost since December 2007,” said Basu. “And what we now see is that job growth is decelerating. The trend is not positive for construction employment in the months ahead.

“However, it’s not all bad news,” Basu said. “Certain construction segments likely will experience growth in the coming months, including healthcare and power generation.”  These are largely due to government spending.

According to a statement, “Associated Builders and Contractors (ABC) is a national association with 74 chapters representing 22,000 merit shop construction and construction-related firms.”