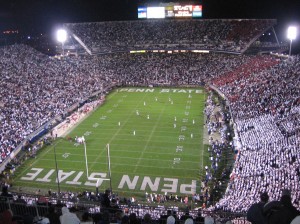 If the accusations against a former Penn State football coach proves true, this will prove to be an issue that could devastate a storied football team and the untold numbers of people touched by it. Where does one begin?  How does one say how to handle a situation like this?  With all the problems in college football, this is unfamiliar territory.

Two top administrators are the latest casualties from the Penn State sexual abuse scandal, which is turning into a PR crisis of monumental proportions.

“The common denominator is Penn State–all three men worked for Penn State and the employees knew about the allegations but did nothing. So the university looks awful in the court of public opinion,” says Glenn Selig, a crisis management PR expert. “The scandal is just breaking and likely more will come out over the coming days.

“Penn State has several groups of people it must be mindful of during this crisis: students, parents, faculty, alumni, the news media and the public at large.  Penn State has an awful lot at stake here and needs to be mindful of what’s at risk. The scandal is here; now it’s a matter of how the university handles it.”

Curley and Schultz face allegations that they lied to a grand jury in connection with the Penn State sex abuse scandal involving Jerry Sandusky, 67, a one-time successor to coach Joe Paterno who retired in 1999.

Sandusky faces 40 abuse charges, including 21 felonies. He is charged with abusing eight boys between 1994 and 2009, with some incidents said to have taken place in a Penn State athletics building.

According to the grand jury investigation, Sandusky met the alleged victims through a youth services foundation he started. Some of the alleged molestation incidents are alleged to have taken place on the Penn State campus.

Attorneys for Curley, Schultz and Sandusky say their clients are innocent.