Special for US Daily Review. 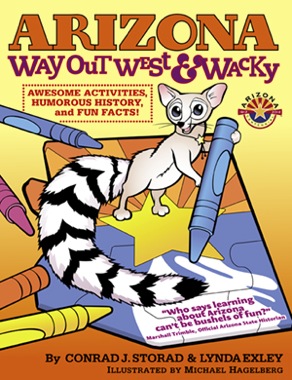 “I am honored to have Arizona Way Out West & Wacky receive this prestigious acknowledgement from the Arizona Historical Advisory Commission,” says the book’s publisher, Linda Radke of Five Star Publications. “From concept to submission to designation, the process took about five months, and the committee is very particular about which projects they accept.”

Although originally set to be published by January 2012 in time for Arizona’s Centennial celebration, Radke says feedback has been so positive she is hoping to have the book available by fall of this year.

“Educators get very excited when they hear about AZ WOWW because it makes learning Arizona history fun for grade-schoolers. It delivers history with a humorous edge by including gross, interesting and wacky stories and facts about Arizona, and it’s filled with crossword puzzles, games, coloring pages, recipes, crafts and other amusements. Plus, when a school orders a minimum of 30 copies, we send them a certificate of permission that allows them to sidestep the copyright and reproduce as much of the book as they want as long as it is for official school use and not for personal use or to share with another school,” explains Radke. “When retailers hear about AZ WOWW, they realize the potential it has for Arizona visitors, grandparents sending Arizona mementos off to their grandchildren and special occasion gifts.”

Another unique aspect of Arizona Way Out West & Wacky Wacky is that it will be entirely produced in Arizona by Arizonans. Chandler’s Five Star Publications is traditionally publishing it; both authors live in Tempe; illustrations are by multi award-winner Michael Hagelberg, who resides in Flagstaff. “It’s a good feeling to know that I am doing my part to stimulate the local economy,” adds Radke.