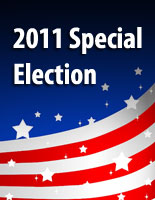 Editor’s Note: Yesterday there were two Special Elections, one in Nevada and the other in the heavily Democratic seat once held by disgraced Congressman Anthony Weiner.  The Nevada House seat was open and in a GOP area.  A loss there for Republicans could mean trouble for the party going in to 2012.  They had little to fear in Nevada 02, because of its strong GOP leanings; they enjoyed a victory.  A defeat in New York’s District 9 is an entirely different story.  Weiner won reelection by double digits in his last race and Obama won the district soundly in 2008.  The winner, media executive Bob Turner, is calling it a referendum.  The question is, of what?  Some are arguing that it is because Deomcrat Weiner embarrassed the district with his Twitter activity that led to his resignation, it was time to give the GOP a chance.  Many Jews (which are well represented demographically in the district) said they were voting for Turner to denounce Obama’s policies towards Israel. Others, still, say it was all about Obama’s economic policies.  Turner framed that issue well and it could become a theme for other Republicans trying to win in heavily Democratic districts.  Turner said that Obama’s policies are destroying the “basic systems” everyone is dependent on, such as Social Security, Medicare, and others.  He argues that the prolific spending in all areas are weakening the foundation of programs everyone is dependent on.  The following are how two media outlets treated the story: