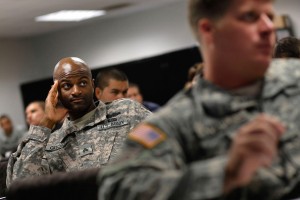 On Tuesday, July 9, 2013, Family Research Council (FRC), a coalition of groups concerned about religious liberty, and Members of Congress, will participate in a Capitol Hill news conference urging support for Rep. John Fleming’s (R-LA) military religious freedom amendment to the National Defense Authorization Act.   The amendment protects the right of service members to not only hold religious beliefs but to act on them and speak about them. The House Armed Services Committee adopted the amendment last month to address growing religious hostility within the military. Rep. Fleming’s amendment has found bipartisan support in the House, but the Obama administration issued a statement expressing strong opposition to the amendment. A similar amendment by Senator Mike Lee (R-UT) passed the Senate Armed Services Committee with broad bipartisan support.

FRC will release a new report at the press conference documenting incidents of hostility toward religious expression in the military.
In April, religious liberty concerns were heightened after anti-Christian activist Mikey Weinstein met with senior Air Force officials at the Pentagon and pressed for the court-martial of Christian service members who share their faith. More than 170,000 Americans signed petitions calling on Defense Secretary Chuck Hagel to protect the religious liberties of military personnel through policies that guarantee those liberties. Concerns among the American public increased following a Rear Admiral’s speech at a National Day of Prayer event in which he recounted a story of his decision to violate military rules preventing him from giving a Bible to a soldier who had attempted suicide.

WHAT: News Conference on Military Religious Freedom Amendment; release of new report on religious hostility in the military

WHERE: The House Triangle