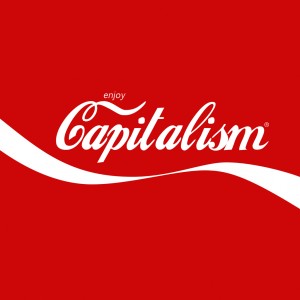 Apparently capitalism has become the new whipping post for the republican candidates. Lines have been drawn, you’re either on the team that supports capitalism, or you are a threat to its very existence.

Newt Gingrich has been criticized by some in the republican party for his critique of Mitt Romney’s record at Bain Capital. Some would say that Gingrich is being critical of capitalism while he has repeatedly asked Romney to explain his role at Bain. I haven’t heard Gingrich say that capitalism is bad, quite the contrary, Gingrich has used capitalism to his own advantage with his own consultancy firm. Romney’s chief complaint that Gingrich is attacking the very principles of capitalism is ridiculous. Romney is the one who bragged about his successful years creating jobs at Bain which clearly makes Bain part of the conversation – right?

It’s not an unreasonable series of questions to ask, what were the success metrics? How many jobs did you create at Bain? How many jobs were lost? Did Bain make profits when companies were downsized or dissolved? And if so how much? It might even be a good idea to ask the question: If you had to do it all over again, knowing that you would run for President of the United States, would you change anything? Could you have done anything differently that might have saved some of those jobs that were lost? Alright listen, before you flip out, I am not suggesting that Romney could have changed anything or that he did anything wrong! So don’t accuse me of such. However many Americans would love to know the answer to those questions, without certain republicans jumping on the ‘you hate capitalism wagon’!

These are reasonable questions, and if Romney had been forthcoming it might not have turned into an issue. The point is this: Romney made Bain a big part of his campaign strategy so Gingrich had every right to question his dealings with Bain without republican leadership accusing him of being anti-American!

Conversely, Gingrich is being attacked by Romney for working as a consultant for Freddie Mac (or Freddie Freeloader). Consulting is one of the purest forms of a free market society. He didn’t destroy jobs and he didn’t hustle them out of any money. Whatever they hired the man to do, I assume he did it or they would have not continued to pay the man, agree? Gingrich was a private citizen and he had the right to do whatever the hell he wanted to do to earn a living, just like you or I. The notion that he should not have used his experience as Speaker is rubbish! We all tap into our past experience and influence when seeking employment or the next gig. C’mon give me a break- it’s called a resume! Furthermore, for Romney to suggest that Gingrich should pay money back to Freddie Freeloader is preposterous! Why doesn’t Romney give his money back to all the people that he legitimately screwed while he was the CEO of Bain Capital.  There is no direct correlation between the housing crisis and one temporary consultant (should we project the same animosity to every employee who ever worked for Freddie Mac?). The fact is that people have lost equity and homes because of a complicated mix of banks, lending institutions, and regulatory changes and a recession created by both the republicans and the democrats?

The candidates should be able to discuss in detail their past dealings without anyone suggesting that capitalism is in trouble and being threatened. And if you happened to make a few bucks off of Bain Capital and/or Freddie Mac in the process, then so be it. Just be prepared to explain to the American people the details. They’ll be the final judge on whether they approve or disapprove of your business dealings! The candidates do not need to hide behind the extinction of capitalism. Both Romney and Gingrich made money in a lawful manner in a free market and they both will suffer the consequences should the American people disagree with their outcomes. In both cases, those results may have hurt some people, intentionally or unintentionally. That will be a question only the American people can answer.

In the final analysis, capitalism is alive and well in America.