Editor’s Note: Glenn Beck is, without question, one of the most polarizing people in the United States today, and maybe even in the world.  His admirers use terms like “courageous” and even “prophetic” to describe him, while his detractors have called him “evil” and “hateful.”  Before he left Fox News, both sides believed he was brilliant, regardless of one’s views of his philosophy, but since he departed (due to decisions by Fox News we are told, in spite of his high ratings) and his decision to start his own network online (GBTV), both friends and foes are wondering the wisdom.  Surely some other network would have gladly picked him up because of the audience that follows?  If not, he could have chosen the path of Anderson Cooper and create his own syndicated show that would certainly had garnered him more control and plenty of money.  But a web TV show?  It will be interesting to see whether it will be concluded he was a genius or a mad man, based on the results. Only history will be able to say.  But Bloomberg owned Businessweek.com has come to its own conclusions and it clearly questions Beck’s wisdom.  We at US Daily Review would love your thoughts on the decisions by Beck and the spin of Business Week: 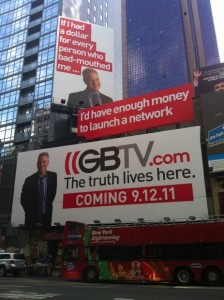 As the sun sets over Jerusalem’s Old City and a performer plays a mystical solo on a curved ram’s horn, Glenn Beck appears before an audience near the southern wall of the Temple Mount, a sacred site for both Jews and Muslims that they have battled over for centuries.

The jocular, baby-faced former Fox News (NWSA) personality, who once blithely referred to President Obama as “a racist,” looks like a preacher in his dark suit, purple tie, and wire-framed glasses as he delivers a fear-mongering speech at his Restoring Courage rally on Aug. 24. The global economy is collapsing, Beck warns; the U.S. and Europe are descending into anarchy, and Islamic terrorists are on the verge of achieving their ultimate goal: the annihilation of Israel. “The world is burning,” Beck says, his voice shaking with emotion. “Whatever we’ve thought would never change, whatever we’ve grown to think is solid and strong and durable, is under siege. You don’t have to be a prophet to know that things aren’t going so well in the world. The threats are mounting. Evil is growing. And darkness is falling.”

Outside the Old City’s walls, several dozen Israeli protesters can be heard chanting, “One, two, three, four, Glenn Beck no more! Five, six, seven, eight, Israel doesn’t need your hate!” Beck ignores them. “God is with me,” he shouts. “I fear not!” As he leaves the stage, an Israeli singer serenades the crowd with a rendition of the song Sabbath Prayer from Fiddler on the Roof.

Many of those in the audience, who grant Beck repeated standing ovations, are American evangelicals who paid almost $5,000 to one of several Beck-endorsed travel agencies to attend. Some shelled out an additional $500 to make the trip with long-shot Republican Presidential candidate Herman Cain. Anybody who’d been listening to Beck’s syndicated radio show—heard weekly by more than 9 million listeners in the U.S.—knows that he has been using Restoring Courage to promote more than just tenuous doomsday predictions. Beck frequently reminded his fans that if they couldn’t make it to the Holy Land, they could watch the “planet-course-altering” rally by subscribing to GBTV, his new Internet channel, for $4.95 a month, or a premium $9.95 monthly rate.

This is where Beck’s television show will resurface on Sept. 12 after its tumultuous 2½-year run on Fox News ended three months ago. While he says that Restoring Courage wasn’t conceived as a promotional event for GBTV—he says it was a genuine effort to increase support for the embattled Jewish state—one might be forgiven for coming away with a different impression.

Beck, 47, has made a fortune by preaching that we are living in cataclysmic times, that politicians shouldn’t be trusted (especially liberals), and that humanity’s salvation lies in buying gold, hoarding food, putting faith in traditional conservative values—and paying him. Beck is the sole investor in Mercury Radio Arts, the Manhattan-based company that produces his radio, television, book publishing, Internet, and live event projects. According to someone familiar with the company who was not authorized to speak publicly about its finances, it brought in $40 million in 2010, $2.5 million of it from Beck’s now-defunct Fox television show and the rest from the other diverse arms of Glenn Beck Inc. “He has monetized every possible platform,” says Michael Harrison, publisher of Talkers, an industry trade publication, who describes Beck as a “brilliant businessman.”

After his bitter break with Fox, the network that made him a known quantity in every household in America, Beck is leaving the mainstream television world behind and embarking on an audacious new business venture. He is pouring resources into GBTV, which he promises will grow into a 24-hour, Internet-based network with scripted and unscripted shows. He is moving from Manhattan to Dallas, where he plans to build a broadcasting studio to house his radio and television programs; he hopes it will become a tourist attraction and powerful symbol of his brand, not unlike NBC’s Today show studio in Rockefeller Center. And he is bankrolling all of it himself…. (read more)