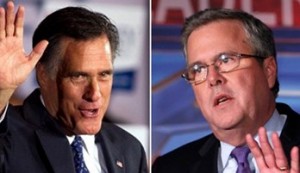 On March 21 Jeb Bush announced his official support for Mitt Romney as the Republican presidential nominee. He says: “Congratulations to Governor Mitt Romney on his win last night and to all the candidates for a hard fought, thoughtful debate and primary season. Primary elections have been held in thirty-four states, and now is the time for Republicans to unite behind Governor Romney and take our message of fiscal conservatism and job creation to all voters this fall. I am endorsing Mitt Romney for our Party’s nomination. We face huge challenges, and we need a leader who understands the economy, recognizes more government regulation is not the answer, believes in entrepreneurial capitalism and works to ensure that all Americans have the opportunity to succeed.”

The time that Romney needed Jeb Bush’s endorsement was prior to the primary in Bush’s home state of Florida. Sure Romney went on to win the state of Florida, but not before spending millions and millions of dollars in a hard fought primary race. So why did Jeb Bush stand on the sidelines while Romney won his own state’s primary?

If you remember awhile back, all the GOP candidates were courting Donald Trump for his endorsement, until he finally supported Mitt Romney. It almost seemed that Trump’s endorsement might hurt Romney. In the case of Trump and Bush, both men elected to hold off until they felt comfortable knowing who the eventual GOP nominee was – they wanted to play it safe before they through their political might behind any candidate. They wanted to make sure that they were attaching themselves to a winner – not a loser!

Even though many in the media sphere have been speculating on whether Jeb Bush would come out and endorse a candidate or not, this recent endorsement will not come as much of a surprise to those that recognize the influence of the republican “establishment”. As the son of a former U.S. president, the brother of another president and a former governor of the fourth largest state in the nation, Jeb Bush exemplifies the establishment for those that reject it. R.C. Hammond, Newt Gingrich’s spokesperson described the endorsement as ” the completion of the establishment trifecta,” referring to previous endorsements by G.W. Bush’s father and former Senate Majority Leader Bob Dole.

No doubt, the rank and file of republican operatives and officials are falling behind Mitt Romney. The question is: How much weight do endorsements carry with voters? Do they move the meter in a significant way?

If a republican leader endorses a candidate, is it safe to day the candidate is likely to take that state’s primary? S.C. governor Nikki Haley endorsed Mitt Romney, who went on to lose the South Carolina primary to Newt Gingrich with 27.7% of the votes to Gingrich’s 40.4%.
While former Florida governor  Jeb Bush stayed neutral through the Florida primary, Romney won the state with 46% of the vote.  If Indiana governor Mitch Daniels endorses Mitt Romney, how much will that help Romney comes the Indiana primary on May 8, 2012?

You have to wonder if endorsements are not effective, why do most political candidates go out of their way to get them? I think political strategist Jim Sizemore said it well: “Before the advent of mass media, voters used to pay a lot of attention to who endorsed who. I can recall when campaigns would hinge on endorsements – when deals really were made in smoked-filled rooms with just a handful of men. Those days are gone now and in my opinion it’s for the better. There’s enough information on the internet that people can do their own research and decide which candidate is best for them”

It’s hard to say, but clearly endorsements have limited appeal. At the end of the day, it’s fair to say that most Americans will make up their minds on their own.
Get your competitive edge, SMASH the Competition…the right way!
About Malcolm Out Loud:  Social and political news commentator Malcolm Out Loud is also the host of WebTV show Malcolm Out Loud TV, an acclaimed motivational speaker, founder of Brink Thinking and the author of the book Smash The Competition. More about him at www.MalcolmOutLoud.TV