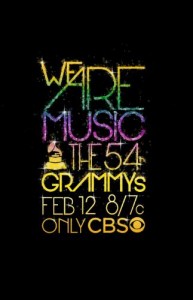 The road to “Music’s Biggest Night” begins with “The Grammy Nominations Concert Live!!” and culminates with the 54th Annual Grammy Awards, live from Staples Center in Los Angeles on Sunday, Feb. 12, 2012, and broadcast on CBS at 8 p.m. ET/PT.

Established in 1957, The Recording Academy is, according to its news release “an organization of musicians, producers, engineers and recording professionals that is dedicated to improving the cultural condition and quality of life for music and its makers. Internationally known for the GRAMMY Awards — the preeminent peer-recognized award for musical excellence and the most credible brand in music — The Recording Academy is responsible for groundbreaking professional development, cultural enrichment, advocacy, education and human services programs. The Academy continues to focus on its mission of recognizing musical excellence, advocating for the well-being of music makers and ensuring music remains an indelible part of our culture.”