Editor’s Note:  The latest Business Week Magazine gives the reader the impression that the children have taken over the place: 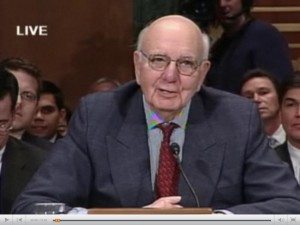 Amias Gerety, 31, Felton C. Booker, 32, and Nick Franchot, 27, are staffers handling vital banking policy. They’re frequent visitors to Capitol Hill, briefing congressional committees on the fine points of systemic risk and capital markets. They’re also the front-line contacts when executives from Wall Street firms come to plead for leniency on the rules arising from the 2010 law. Washington’s bank lobbyists privately refer to them as the “young Turks” or the “young pups.”

Washington, of course, is a town full of fresh-faced, eager Ivy Leaguers looking to make their mark. Mostly they toil in obscurity—and with plenty of adult supervision. These days the Treasury Dept. is hamstrung by vacancies as the Obama Administration has been slow to nominate people for the more senior jobs, while the Senate has been loath to confirm appointees as an election nears. The post of assistant secretary for financial institutions—the top banking policymaker—has been vacant since December. Last month the Administration announced it had picked Cyrus Amir-Mokri, 47, formerly of the U.S. Commodity Futures Trading Commission, for the job. The Senate has yet to vote on his nomination. At least four other Treasury nominees are in the same position.

That often leaves relative newcomers such as Gerety, Booker, and Franchot running the show, according to the bank lobbyists and congressional staff. While bankers, who would not speak on the record for fear of alienating Treasury, say the three are diligent and smart, the lack of gray-haired expertise at the department has led to plenty of grousing.

Financial institutions are grappling with the biggest raft of government changes to the industry since the 1930s. How the Treasury and other banking regulators craft rules such as Volcker’s could affect the industry’s bottom line by billions of dollars. “We don’t know who to talk to about detail issues, and we can’t get feedback,” says Wayne A. Abernathy, an executive vice-president at the American Bankers Assn., a trade…(read more)