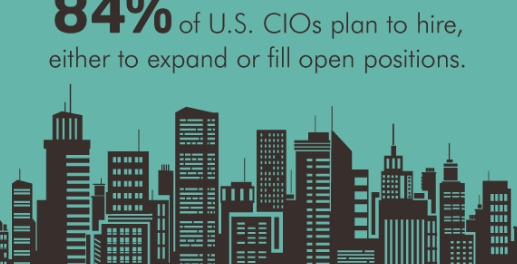 By Robert Half Technology, Special for  USDR

Twenty-one percent of U.S. chief information officers (CIOs) surveyed recently plan to expand their technology teams in the second half of 2016, according to the Robert Half Technology IT Hiring Forecast and Local Trend Report. Sixty-three percent of CIOs intend to only fill open roles, 13 percent anticipate putting hiring plans on hold, and 3 percent expect to reduce their IT staff in the second half of the  year.

View a video and infographic of research  highlights.

“Organizations are getting the green light on more technology projects, prompting them to make strategic hires,” said John Reed, senior executive director of Robert Half Technology. “However, technology leaders continue to struggle to find highly skilled talent in a market with low unemployment. They seek IT professionals with specialized skills, especially in the areas of cloud computing, data analytics, mobile strategies and  cybersecurity.”

The hiring forecast is based on telephone interviews with more than 2,500 CIOs from 25 major U.S. markets who were asked to provide a six-month hiring  outlook.

Among the 25 major markets included in the IT Hiring Forecast and Local Trend Report, CIOs in the following cities were most optimistic about increasing the size of their  teams:

Recruiting remains a challenge: 61 percent of CIOs said it’s somewhat or very challenging to find skilled IT professionals today. They also cited the following skills as being in greatest demand within their  organizations:

The survey was developed by Robert Half Technology and conducted by an independent research firm. To ensure that companies from all segments were represented in the study, the sample was stratified by number of employees. The results were weighted to reflect the appropriate employee population in the United States. The margin of error is +/-1.6 percent at the 90 percent confidence level. Robert Half Technology has been tracking IT hiring activity in the United States since  1995.

About Robert Half  Technology

Robert Half Technology is a leading provider of technology professionals, specializing in a full spectrum of technology services – from project, contract-to-hire and full-time IT staffing services to managed services and solution consulting. With more than 100 locations in North America, South America, Europe and the Asia-Pacific region, the company provides highly skilled talent for IT initiatives ranging from web development and multiplatform systems integration to network security and technical support. For more information about Robert Half Technology, please visit rht.com. For career and management advice, read our award-winning blog at  blog.rht.com.