By Richard C. Harwood, Special for US Daily Review. 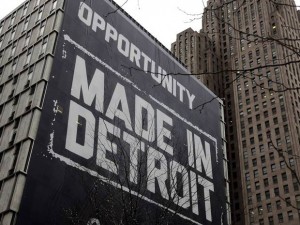 The doom and gloom tale of Detroit abounds. But don’t declare the city dead just yet. There’s another story about Detroit waiting to be told, one of resiliency and possibility amid the trouble. This story is vital to the Motor City’s future and how the rest of us think about the potential of communities.

There’s no question the numbers in Detroit don’t work. The city has $18.5 billion in long-term debt. The average police response time is 58 minutes. Tens of thousands of abandoned homes dot the landscape.

The narrative we tell ourselves over and again about Detroit is a tale of demise, decline, and destruction. It is a story that has no sense of forward momentum. Instead, everything is stuck, immovable, intractable. The currency of this story is made up of depressing aggregate numbers, photos of deserted factories overrun by weeds and decay and highlight reels of corrupt public officials.

There is no denying this reality exists. But the fact is that this is only part of Detroit’s state of affairs, not the whole story. And if we miss the whole story, we will miss the possibilities for Detroit’s future.

Despite its troubles, Detroit is making headway. New businesses are moving downtown. Buildings are being renovated. Within some schools, graduation rates are improving. Murals and other artwork are popping up in public spaces. Entrepreneurs are choosing Detroit.

When communities reach this point in their transition, there is a competition between narratives: a dominant depiction of doom and gloom versus a story of emerging possibility and potential hope.

What’s critical at this stage is to tell the emerging narrative in ways that build momentum, help people imagine a different future and forge more productive norms for how people engage, interact and get things done together. It takes a concerted effort to spread existing pockets of change so that the emerging narrative continually expands, grows and deepens.

As this emerging narrative takes root, it generates belief among people that they can come together to create positive change. Such belief is at the core of whether a community will find a new path forward.

Of course, the hard truth is that the lives of most people in Detroit have not improved in recent years. Now, facing city-wide bankruptcy, they may be asked to withstand even more pain and loss. During the times I’ve driven through Detroit, I’ve often felt a profound sense of sadness – and anger – about the persistent negative condition of so many people’s lives.

It does no one any good to sugarcoat Detroit’s challenges. They are real. They must be addressed. As my friend Michael Brennen, CEO of United Way of Southeast Michigan (and the innovator behind the promising improvements in graduation rates in some schools) recently wrote, “Everyone in our region will be affected. As a community, we will have to work together and create a viable road map to navigate the changes that are to come.”

The question now is: What will help propel the community forward? One answer is certain: allowing the narrative of doom and gloom to win means the community will be held captive to the past.  That’s because the narrative we tell about ourselves shapes our attitudes, behaviors and actions.

In Detroit, we can’t ignore the hard truths that require our urgent and committed action. But to move ahead together, we must recognize that it is the emerging story of possibility that offers a forward-moving path of hope.