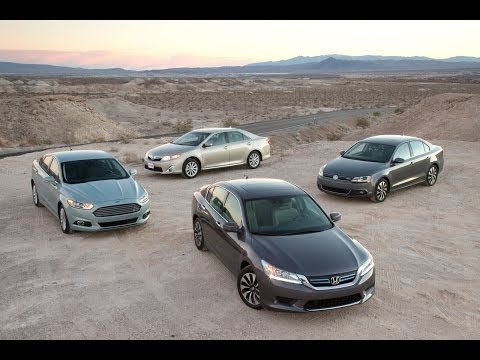 The Accord Hybrid’s 40-mpg performance on Consumer Reports combined city and highway tests make it a class leader for fuel economy among midsized sedans. Testers found the Accord Hybrid has a very impressive hybrid system that smoothly transitions between battery and engine power. To save fuel, even at highway speeds, the engine willingly shuts off as soon as drivers lift their foot off the gas pedal.

But Consumer Reports’ engineers caution that buyers expecting their car to the EPA’s figure of 47 mpg posted on the window sticker might be disappointed.

Prior Consumer Reports tests of the Ford Fusion Hybrid and C-Max Hybrid also found a significant shortfall between the EPA’s estimated highway fuel economy figures and those in CR’s own fuel economy tests.

Consumer Reports has also tested the new hybrid version of the Subaru XV Crosstrek, as well as new diesel versions of the BMW 3 Series and Jeep Grand Cherokee.

The XV Crosstrek Hybrid underwhelmed Consumer Reports’ engineers, as testers found it to be a halfhearted hybrid. When applying the gas pedal gingerly, the XV Crosstrek Hybrid managed to creep up to 20 mph on electric power, but only if the outside temperature was above 50° F and the heat or air conditioner was turned off. Moreover, this hybrid isn’t particularly refined. As with others, a start/stop system shuts off the engine when drivers come to a halt, but it restarts with a shudder when they’re ready to go again.

The traditional XV Crosstrek Premium’s 148-hp, 2.0-liter four-cylinder engine helped it deliver a frugal 26 mpg overall in CR’s test. The hybrid version improves slightly on the drivability of the regular one, but it averaged only an additional 2 mpg overall in Consumer Reports tests. Considering it costs about $3,000 more than the regular version, the hybrid is not worth the extra money for most shoppers.

The Jeep and BMW diesels turned in a more impressive showing in Consumer Reports tests. Compared with their gasoline counterparts, they boosted fuel economy by a significant 6 and 7 mpg overall to 24 and 35 mpg, respectively—without a significant compromise in performance or refinement. With their excellent highway efficiency of 32 and 49 mpg, they provide lengthy cruising ranges of 785 and 735 miles. Both vehicles scored near the top of their classes in Consumer Reports testing.

There were trade offs to the 328d’s impressive fuel economy. Its acceleration isn’t exactly speedy; its 8.5-second 0-to-60 mph time is more than 2 seconds slower than the 328i’s. But with 280 lb. ft. of torque on tap, the diesel packs a nice punch for merging or passing. With a trace of  diesel clatter, the 328d is a little noisier than the 328i.

A 2014 freshening of the Grand Cherokee brought improved controls, better fit and finish, a slick eight-speed automatic transmission, and electric steering system. The available 240-hp, 3.0-liter turbo-diesel V6 helps the Grand Cherokee further stand out for its impressive versatility. Overall, this modern diesel brings a new level of fuel efficiency to the Grand Cherokee while retaining a mostly civilized driving experience. Consumer Reports averaged an impressive 24 mpg, which is a 6-mpg boost in overall fuel economy compared with the 3.6-liter gasoline V6. That ties the Grand Cherokee with the diesel-powered Volkswagen Touareg TDI as the most efficient non-hybrid midsized SUV.

Complete reports and ratings for the Honda Accord Hybrid, Subaru XV Crosstrek Hybrid, BMW 328d, and Jeep Cherokee Diesel, as well as updated tests for the recently freshened Volkswagen Passat, Honda Civic and Dodge Dart are available now at www.ConsumerReports.org or in the July Issue of Consumer Reports on sale June 3.