Democratic Whip Steny Hoyer (D-Md.) said he supports building the Keystone XL Pipeline and that he agrees with the State Department’s report that not building the pipeline would increase greenhouse gas emissions.
At a pen-and-pad briefing at the U.S. Capitol on Tuesday, CNSNews.comasked Hoyer, “In the State Department’s report, it said that if the Keystone Pipeline is not built, the method of delivering oil would increase greenhouse gases from 28 to 42 percent, are you in favor of not building ….” 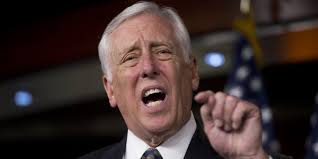 Hoyer then said, “In favor of not building it? I’m in favor of building it. I said about a year ago, I think in this group, that I was for Keystone.”
“I think the State Department is correct,” he said.  “The president has made the observation on  numerous occasions and I’ve heard him personally, been with him when he said that obviously we want to be on a path away from fossil fuels, but natural gases are preferable to oil, clean air. Obviously, the extraction process itself is concerning to many people, as it well should be. We need to make sure that it’s safe, no harm to the water.”
– See more at:  http://www.cnsnews.com/news/article/ali-meyer/hoyer-keystone-i-m-favor-building-it#sthash.1v30jvrQ.dpuf
All opinions expressed on USDR are those of the author and not necessarily those of US Daily Review.