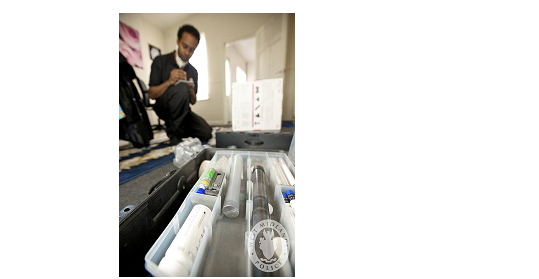 Many believe the U.S. criminal justice system needs fixing, and it appears that adjustments might be on the horizon. Not only have there been advancements and changes in DNA collection and usage as well as developments in technology, but Congress is now in the process of considering two bipartisan bills that would offer major reform to the criminal justice system. For those considering a career in criminal justice administration, let’s take a look at how each of these advances will impact this field of study.

Technology is used and developed in nearly every aspect of the criminal justice system — from surveillance drones to video-based crowdsourcing software programs to facial recognition software to gunshot detection systems like ShotSpotter to biometrics and DNA analysis. These advancements are used throughout the criminal justice process, from the investigation to the prosecution of crimes, and some even hope to use technology to predict crime before it happens. Here are some of the latest trends and uses of technology in the field of criminal justice:

Security cameras and closed-circuit television (CCTV)
Social media, predictive policing in which software based on probability algorithms attempt to anticipate the where, who, and when of crime, and GPS monitoring
Location-based data to track probationers and parolees.
Plus, increasingly sophisticated intelligence databases will likely be used not only by police officers and analysts but by the general public, similar to the now-common sex offender registries. The future will also bring improvements in interoperability systems, allowing officials to talk electronically to one another, particularly during emergencies.

DNA testing isn’t new, but a recent Supreme Court decision will allow police to continue using cheek swabs to take DNA from the people they arrest. While this testing has led to the exoneration of more than 300 people wrongly convicted of crimes, the technology is far from fulfilling its promise of aiding law enforcement in identifying criminals while letting the innocent go free. A Department of Justice study estimates that nearly 900,000 requests for biological screening, mostly DNA testing, are backlogged nationally and that large numbers of kits from routine arrests are making the problem worse by diluting the database. Most experts are in favor of DNA databases to exonerate those who are innocent and apprehend those who are guilty, but they caution that this recent court ruling could exponentially expand the database with minor offenders’ DNA profiles, which could in turn slow the investigation process when assessing DNA in criminal offense cases.

Congress is considering two bipartisan bills that could radically change the United States’ incarceration trend. For decades, harsh mandatory minimum sentencing laws have overstuffed prisons with tens of thousands of low-level, non-violent drug offenders who must serve excessively long sentences. Federal prisons currently hold more than 215,000 inmates — almost half are for drug crimes — and many become re-offenders after serving their sentence due to a lack of effective rehabilitation programs and a lack of employment or drug treatment programs after release.

The first bill, called the Smarter Sentencing Act, would halve mandatory minimum sentences for certain non-violent drug crimes, which now stand at five, 10 and 20 years. It would give judges more discretion to sentence below the mandatory minimum in some cases, and it would provide a chance at early release for thousands of inmates sentenced under an older law that disproportionately punished crack cocaine offenders. The second bill, called the Recidivism Reduction and Public Safety Act, would allow low-risk prisoners to earn credit for early release by participating in education, job training and drug treatment programs. These proposals for change are prompted in part by the Bureau of Prisons lack of funding. The bureau currently takes up $7 billion a year, or 25 percent of the Department of Justice’s entire budget.

Technology will continue to change the face of criminal justice, but as technology advances, the ethics of its use will likely be heavily debated. What is fair use of surveillance? What is permissible to use from social media sites? If a crime hasn’t occurred what are the ethics involved in stopping it before it does happen? It is likely that use of DNA testing will only increase. Therefore, experts will need to determine how to make sure the system works in a time-sensitive manner. If the bills Congress is currently considering are signed, they would significantly impact the federal prison system as well as the Department of Justice and all those in the field of criminal justice.