Editor’s Note by Kevin Price, Publisher and Editor in Chief

In the 1990s I visited Hungary right after the fall of Communism. The country had suffered decades of Marxism and its some what “soft form” had made the Hungarian people notoriously “lazy” in many of their own words.  They had developed an almost entrepreneurial approach to welfare that had people determine exactly the number of kids they needed to where welfare would exceed would they could ever make in employment, people were often living together because it was virtually impossible to marry because of the country’s odd laws, and it had become a system in which “creative” sloth was almost considered in high regard.  There has not been enough change in terms of incentives to work and there have not been a big enough shift in culture to change this basic approach to government.  As a result, unemployment is a staggering 45.4 percent and the country cannot keep up with the demand on social benefits. That has led to very harsh changes in the way the people receive welfare as seen in a recent article in Bloomberg Businessweek:

Wielding scythes and pitchforks, about 30 men and women hack through brambles on a hillside above the Hungarian village of Gyöngyöspata. With the nearest road more than a half mile away, workers have to hike in with food and water for the day. For bathroom and lunch breaks, they duck into a thicket that offers the only shade in the 98F heat. “It’s degrading to work in these conditions,” says Károly Lakatos, a 38-year-old father of three who was laid off earlier this year from his forklift-operator job in an auto parts factory. When his unemployment benefits ran out, the government assigned him to a brigade clearing land owned by the village.

If Prime Minister Viktor Orbán has his way, hundreds of thousands of Hungarians will soon join similar squads. Under a plan approved by Parliament in July, by 2012 some 300,000 people will be working in community service jobs—doing everything from picking up trash to building stadiums—instead of drawing welfare or unemployment benefits. Hungary will no longer “give benefits to those capable of work, when there is much work to be done,” Orbán said in June. The effort is part of the ruling Fidesz Party’s 2010 election pledge to create 1 million jobs over the next decade.

No question, Hungary needs jobs. Only 54.6 percent of the working-age population is employed, the lowest rate in the European Union, according to EU data. An anemic economy, forecast to grow 2 percent in 2011, is part of the problem. But the real culprit is the sprawling welfare state created after the fall of communism. To help workers who lost jobs in state-run industries, the government established generous early retirement, disability, and parental leave programs. Those benefits are still in place. According to the EU’s Eurostat agency, in 2008 Hungary spent $5,200 per capita on social protection, vs. $4,088 in Slovakia and $3,706 in Poland. “There are people in this work program who’ve never had a proper job in their lives,” says Oszkár Juhász, the mayor of Gyöngyöspata, which is an hour’s drive northeast of Budapest. 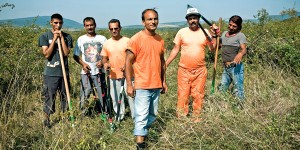 Under the new law, jobless benefits will be cut off after 90 days, down from nine months, and eligibility for other welfare payouts will be curtailed. People taken off the dole are being offered jobs paying $303 a month, twice the basic welfare payment but less than the standard $415 minimum wage. Those who refuse will receive no government aid.

The opposition Socialist Party says the program “is based on fear and force, just like in a previous era of terror”—an allusion to the hundreds of thousands of Hungarians who were conscripted for Nazi…(read more)