By Harris Poll, Special for US Daily Review. 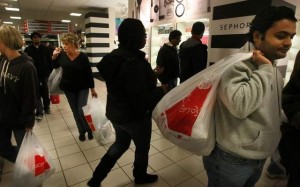 While several department stores forfeited profit by deep holiday discounting, Kohl’s won the hearts and mind of the customer with the highest overall Customer Relationship Score compared to other mid tier department stores.    Kohl’s edges jcpenney on two of three Customer Relationship metrics – Emotional and Behavioral – while sharing the lead with jcpenney on the Rational dimension.

These are some of the results of The Harris Poll of 2,237 adults surveyed online between December 5 and 12, 2011 by Harris Interactive.

The newly released People’s Pick award recognizes the strength of consumers’ bonds with mid-tier department stores and reflects the customers’ connections and future intentions. Looking at the three elements, the first, rational, takes into accountsatisfaction and the degree to which expectations are met while the emotional aspect is determined by how valued a customer feels and their overall level of trust for that department store. Finally, the behavior element explores a consumer’s likelihood to continue shopping and recommend the department store, as well as perceptions of the stores competitive advantage in the marketplace. Together these metrics form the overall Customer Relationship Score.

Kohl’s (5.7) achieved the highest overall Customer Relationship Score, followed by jcpenney (5.6), Dillard’s (5.5), Sears (5.5), and Macy’s (5.4).  “While neck and neck with jcpenney on several metrics, what really stands in Kohl’s favor is the customer’s perception of the unique benefits offered by the department store, as well as their advocacy for Kohl’s as demonstrated in theirlikelihood to continue to shop at and recommend the department store to friends, family and colleagues,” said Mike Chadsey, Senior Consultant for Harris Interactive’s Customer Relationship Consulting team. For example, a particular competitive advantage is Kohl’s performance on providing unique benefits (5.4), scoring significantly higher than other mid tier retailers (jcpenney (5.1), Dillard’s (4.9), Sears (4.9) and Macy’s (4.8). “Kohl’s has earned the desired behaviors that retailers seek in a long term customer relationship. The challenge will be to find ways to maintain and leverage that level of engagement while striving to improve store profitability.”

*The Harris Poll Customer Relationship Series is a new collection of ranking studies that measure the strength of a brands relationship with their customers based on scores in three key dimensions:  Emotional Affinity, Rational Performance and Behavioral Intentions.  The People’s Pick Award is provided to the highest ranked brand in the series.