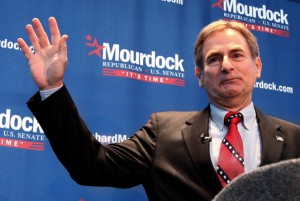 Indiana State Treasurer Richard Mourdock is running against one of the most powerful and longest serving members of the US Senate, Richard Lugar. Normally most would be quick to dismiss anyone to challenge Lugar in a GOP primary.  But these are not normal times and Mourdock is catching the attention of some major conservative organizations that have always supported Lugar in the past.  Now the challenger is joining the slate of many candidates for federal office of presenting his own plan for dealing with the nation’s budget issues and long-term debt.

“More than likely, the Super Committee will not be able to report back to Congress meaningful cuts of $1.2 trillion. They’ll either budget such reductions far into the future or otherwise reduce the size of cuts required by their vote last July. They may even vote to undo the requirements placed on the committee itself” said Mourdock.

He went on to point out that “”The $1.2 trillion reduction the Super Committee is debating is less than the deficit in this year’s federal spending. In fact, the reduction is less than 3% of planned spending over ten years.  Even worse, given the budgeted growth planned in government over the next decade, reducing just $1.2 trillion could still cause our national debt to increase by as much as $8 trillion.”

In addition Mourdock argued that “Our Congress is missing the point: the national debt is the issue here, not the simple reduction of $1.2 trillion.  Admiral Michael Mullen, former head of the Joint Chiefs of Staff said recently, ‘our debt is the greatest threat to our national security.’ He is correct.”

He then went on to focus on the so called “Super Committee, stating that “In forming the Super Committee, Congress instructed its members to reduce spending by $1.2 trillion to avoid another credit downgrade by Standard & Poor’s. Congress is reacting with short-term planning and crisis management to the situation. Today, I’m announcing a budget plan that emphasizes long-term planning. As we face another budget crisis, all Senators should be stating their priorities and spending targets but few are doing so.  My plan is aggressive. Over ten years, it reduces total federal government spending by 18.9%, a total of $7.6 trillion.  It calls for 2013 starting budgets for Social Security, Medicare, Medicaid and Defense spending to pre-2010 levels with modest increases going forward. These four areas of the budget equal 60% of total spending and must be targeted if we hope to see meaningful reductions.  It is important to note that I believe all Americans today over the age of 55 have the full benefits of the programs they have planned on through their working life.  Younger Americans must understand there will be changes ahead, however.”

Mourdock argues that his approach would have far reaching consequences, stating “My plan aggressively reduces discretionary spending.  To meet the necessary goals, I’m calling for the elimination of the Department of Housing & Urban Development, Department of Commerce, Department of Education and the Department of Energy. If left ‘as is’ in the current baseline, those four agencies would cost taxpayers $1.8 trillion.  Essential duties (particularly the Census within the Department of Commerce and Nuclear Regulatory Activities under the Department of Energy) would be assigned elsewhere.Non-discretionary budget agencies generally would revert to 2010 budget year levels to begin 2013 and would then see increases over the next ten years, generally reflecting growth of .50 to 1% annually. I spent many hours formulating this plan and these reductions were not easy to make. I see them as painful, severe and inconvenient but absolutely necessary to our economic survival.”

In spite of the fact that the plan would be far reaching and even painful, Mourdock believes that “Voters, particularly Republican voters on Primary Day 2012, will look to see which candidate is willing to deal seriously with critical budget issues.”

Finally, his attention turns to his opponent, saying “In the last thirty days, Senator Lugar voted against making a $1 billion dollar cut from the Rural Development Agency. He also voted against a $6 million dollar cut for the Small Community Air Service Development Program. The cuts I’m calling for here are 7,600,000 times greater than those he refused to support. The question is, where, how much and when will Senator Lugar issue a similar plan for significant reductions.”

Mourdock is receiving the support of some of the biggest names and groups in conservative politics including Eagle Forum, radio host Mark Levin, Gun Owners of America, Steve Forbes, FreedomWorks, Tea Party Express, and many others.  Many believe that this could be the biggest upset in terms of an establishment candidate in 2012.