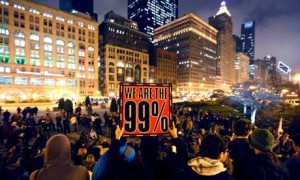 According to a group of researchers, Occupy Wall Street supporters are “largely college-educated liberals who support gay marriage and higher taxes for the rich, according to a recent survey.”

Faculty and student researchers at Benedictine University in Lisle, Ill., located just outside of Chicago, conducted research of the Occupy Chicago movement. Researchers sought to gauge the perspective of the Occupy movement by doing a comparative analysis of respondent data to a survey conducted last year on the Tea Party movement.

In late October, the group spent the day collecting survey data from Occupy Wall Street supporters who were protesting near the Chicago Board of Trade.

Though the group of 139 respondents identified themselves as liberals who voted most often with the Democratic Party, members were not happy with President Barack Obama’s policies, particularly the handling of the economy, which they acknowledge Obama inherited. Approximately 84 percent of Occupy Chicago members polled said that Americans making more than $250,000 should pay more taxes and, surprising to many, 75 percent said Obama’s policies favor the rich.

With the presidential election less than one year away, President Obama will be challenged to translate his sympathy for Occupy protestors into reciprocal votes for him. Occupy Chicago respondents gave Obama a 33 percent job approval rate. Obama’s handling of the economy and health care were major disapproval points.

One significant and somewhat surprising finding was that Occupy Wall Street supporters believe violence is sometimes necessary against the government, said Phil Hardy, a Benedictine assistant professor of Political Science and one of the survey organizers.

Though the Occupy Wall Street movement has been largely peaceful, 58 percent of Occupy Chicago survey respondents agreed that violence against the government is sometimes justified.

As more Occupy movements across the country are being evicted from their encampments, the potential for violent conflicts with government officials may be growing along with the frustrations of Occupy members and its supporters.

If protests do not remain peaceful, Hardy questioned whether Obama and other liberals and moderate Republicans would be willing to align themselves with the Occupy movement.

Whether the protestors were simply expressing frustrations or whether violence may occur remains to be seen, Hardy said. Tea Party members were asked a similar question with 25 percent reporting that violence against the government is sometimes necessary, Hardy added.

No information was provided by the researches as to how scientific either of the polls were, nor did they provide whether research was done anywhere other than Chicago.