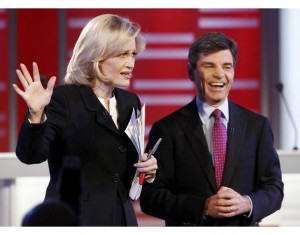 The latest ABC News New Hampshire debate was the lamest of debates in a long line of lame debates. That is saying something when you compare it to the CNBC and MSNBC debates. These debates have become nothing more than boxing matches where the moderators attempt to score a knockout to the presidential candidates. The moderators have been trying their darnedest to pit one candidate against another candidate with the “he said, so what do you say back to him” question.

Hasn’t it become clear at this point that the liberal moderators of ABC, CNBC and MSNBC are focused on one thing and one thing only? To embarrass the Republicans to every degree that they can and make them look like a bunch of asses!

I mean come on! It’s become a contest of which moderator can out do the next moderator. Gotcha questions, stupid questions and any question that can make a candidate look bad is the order of the day.

–        Ron Paul was as feisty as we’ve seen him. More outspoken, more confident and not backing down from any of the candidates. Paul went after Santorum and Gingrich, but left Romney untouched – again. (Maybe they have a secret pact)

–        Newt Gingrich has some good lines throughout the evening, but clearly didn’t have as much mic time as previous debates. Gingrich was very careful not to appear angry at Romney, but letting him off soft is not a victory.

–        Jon Huntsman was speaking in riddles much of the evening and even used the Chinese language to impress us all.

–        Rick Perry is ready to send troops back into Iraq and he tried desperately to get in a groove that would showcase his conservative record.

–        Rick Santorum did okay. He has some good ideas, but sometimes has trouble projecting them in a manner which made you feel like he could be the President of the United States.

–        Michelle Bachmann had her best debate performance yet and she wasn’t even there. Just the fact that we didn’t have to hear her screeching voice and dancing with the questions while never really answering them – scored big for her.