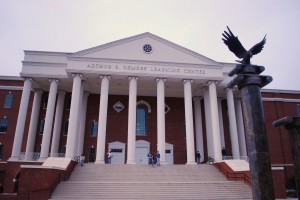 The story is interesting, in spite of the fact that it includes no major names and includes (by news story standards) a modest amount of money.  It is a story of a very average person that wanted to make a big difference in the lives of others. Liberty University recently received a $474,000 bequest from the estate of Martinsville, Va., resident Floyd William Smith, who died Nov. 4, 2010 at age 96.

Harold Knowles of Liberty’s Planned Giving Department met Smith only one time 10 years ago during an unexpected visit to his home.

Knowles said Smith was private about his estate plans, but indicated he had “everything in order” and “was thinking about Liberty.”

Smith worked as an automobile mechanic and during World War II was a first class machinist and master mechanic at the Naval Gun Factory in Washington, D.C. He later operated Smith & Mason Garage with his business partner Wilson Mason. After he retired in 1971, he assisted teachers in Martinsville High School’s vocational department. He was a world traveler and a NASCAR fan.

Smith never visited Liberty’s campus and did not specify how his gift was to be used. He financially contributed to Liberty since the 1990s, when he made a series of $25 and $50 gifts.  When the gifts went from $50 to $474,000.00, it begins to capture the attention of others.  Smith and his wife, Marietta, were married for 67 years when she died in 2009. Smith was a member of McCabe Memorial Baptist Church.

Increasingly individuals are making the choice of supporting schools with which they have no affiliation.  This is because the philosophical convictions or supported behaviors of their “old school,” are no longer in line with their personal beliefs.  What is interesting about Smith’s case is that there appears to be no formal relation on Smith’s part with any college and university.

The biggest shift in academia has been the move towards ideological liberalism in the classroom. This is rampant in universities and colleges through out the country.  The Intercollegiate Studies Institute is an organization that helps supplement these liberal classrooms with conservative content and they also monitor the ideological situation on college campuses.