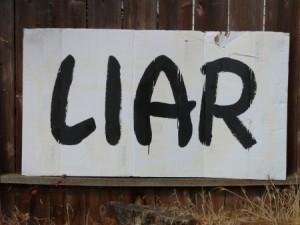 Whether or not one is a religious minded person it is interesting to note that in the Judeo-Christian biblical text referencing the Ten Commandments, there is not one that says, ‘Thou Shalt Not Lie’. This is interesting. Personally I believe that lying is much more destructive than modern Man would care to admit. There was a time when lying was a big deal. A man’s word is his bond. That’s what Grandpa Rodebush always said. If a man lied, especially in a business deal, he would become a pariah in the community. People would refuse to do business with such a man. Perhaps it is just the skewed observations of a pre-senile, post-Clinton world observer but it seems to me that lying doesn’t have quite the social tattoo as days gone by. There is an old saying, “You can never go home.” The point is that you can’t go back, only forward. I hope that this is wrong and that we can return to a time when lying was considered a reprehensible sin which would lose you the trust of all of your neighbors and returning the shine to your reputation was difficult indeed.

It raises the question: “When did lying become somewhat more acceptable as a ‘normal’ human activity?” This requires a nuanced concept of lying which some would rightly argue is the problem in the first place, but nevertheless, I shall proceed:

First, you have lies. Everyone lies. People typically argue that small lies or ‘white lies’ as we racist Southerners tend to call them, are harmless but I disagree. “Does this make me look fat?” Yes. Everything makes you look fat, cause you’re fat. While that response may hurt, it is truthful and the inquiring individual may actually start to look at eating less and moving around more. “Do you like this hat?” No, it’s hideous. You look like the north end of a southbound ostrich. I mean, really are you going to let someone you care for go out into public looking ridiculous? That’s not love, that’s selfishness. Lying to people just gives them a false sense of reality. That is not good, ever. Like a band-aid, just rip it off and get it over with! “But I love you anyway. You overlook my crudeness and poor habits and I overlook your girth and wanting sense of style.”

Second, you have liars. Now this is a separate category for people who lie for personal gain. They lie to make themselves look good and/or you look bad. For them lying is a defensive mechanism. This too, is quite common. However, when caught in the lie, these people will typically fess up, own it and move on. “Sorry, Man. I was just embarassed to admit that I ate your last cookie, but damn you’re a good cook!”

Thirdly, you have damn liars. This is the crucial category and the one which has grown exponentially of late in my opinion. Persons within this category will lie again after they are caught to attempt to cover the first lie. Then they will even divert attention and accuse the person who actually caught them lying of lying themselves. They obfuscate, divert, accuse, get angry and cause a scene all to avoid ever having to admit that they simply lied. This is the dangerous category. People get hurt seriously by this kind of liar. In business as well as in politics this type of liar is becoming ever more prevalent. Ask yourself, what percentage of this type of liar resides in state capitols or Washington D.C.?

We have come to simply joke about this phenomenom but it is deadly serious. All politicians obfuscate, we have taught them to. We don’t elect politicians who tell us the truth. We want them to lie to us. But we are in new territory now. Now they look you in the eye and lie straight through their teeth and don’t even blink an eye. How bad is it? The propogandist media actually ran stories after President Bill Clinton’s piccadillo’s saying that lying was actually healthy. Clinton is still considered a grand figure in the Democrat party. Lying not only didn’t hurt him, it made him an icon for worship among Progressives/Communists/Marxists/Liberals etc. We are now living with a generation of kids who grew up looking up to Bill Clinton. Why, certain acts are not even considered cheating by many of these ‘modern’ folks. Damn liars hurt society at large in ways that are insidious and difficult to accurately measure.

Be very careful who you give your most precious item…your vote. The presidency carries such power in the bully pulpit that it can actually affect an entire generation of our kids. We are all human and we all lie. But once you know a person as a damn liar, do not ever trust or respect them again until contrite repentance and several years of changed behavior give you reason to believe them again. NEVER believe what they say. WATCH what they do, then marginalize anyone who proves to be a damn liar. And for yourself, I suggest you do as I do; try harder every day to be completely honest. The truth will indeed set you free. You may indeed lose a few ‘friends’. But the friends you keep will be the true friends. By the way, those ‘reading’ glasses don’t make you look thoughtful. They make you look fake. Grandpa always said you can spot an illiterate by the pocket full of pens and the crossword under the arm.

We will all die. Try at least to die with your honor somewhat intact.