By Pat Lawrence (Pat and Daniel Burke), Special for US Daily Review. 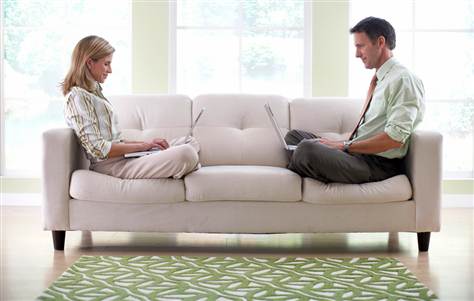 Pat Lawrence does not exist; it is part of the fiction. ‘Pat Lawrence’ is a pseudonym for husband and wife writing team of PAT Adsit Burke and Daniel LAWRENCE Burke.

Our personal and professional collaboration began simultaneously when we met for the very first time. We were cast as husband-and-wife actors, George and Charlotte Hay, in Ken Ludwig’s hilarious play Moon Over Buffalo. At the end of the second act, Mr. Ludwig wrote a passionate kiss for the couple and for us, at that magical moment, the sparks flew and both our marital partnership and our business partnership were born.  (We are eternally grateful to Mr. Ludwig.)

We now own and run our own business: Murder-By-Design, live performances of interactive murder mysteries. After launching the enterprise we needed content so it was a natural evolution of our business partnership to co-author our murder mystery scripts. Six scripts later, we agreed to write a two-act comedy play based on actual comedic events in our lives and Squirrels In The Attic was born. (We’re delighted to report audiences have loved it.)

Since we enjoy reading taut, suspense-filled fiction (one of us reads aloud to the other), last year we decided to write our own novel and Jarred Into Being by Pat Lawrence, a roller coaster of a read by the way, was penned, published, and—we are delighted to say— is earning some wonderful five star reviews.

People often ask us, “How do you work together? How do you collaborate?”

The answers to these questions are:  Not really, No, No, and Definitely Not. Collaborative writing is like riding a tandem bicycle:  one author steers, but both authors provide the energy to move, watch to avoid the hazards, agree on which direction to turn, and settle on the final destination.

All of our collaborations begin with agreement on a single idea that serves as the overarching theme of the entire work. In Jarred Into Being the theme is: each individual’s life is profoundly influenced by the lives that intersect and surround it.  Next, we agreed on the major plot elements that would create an interesting story to illustrate that theme. In Jarred Into Being, a young girl’s loss of her parents places her in great peril because the characters now intersecting and surrounding her life want to possess her rather than protect her. The conflict in the novel arises out of the fact that our main character, Eva, is unwavering in her determination not to be possessed, and she continually battles for independence and freedom from the powerful and corrupt forces that would dominate her.

After those elements are settled, draft one begins in earnest.  We create the incidents and the characters that dramatize the main character’s plight. One of us (the partner who steers the bike to continue the analogy above) writes sections—maybe a chapter, maybe several—and submits those to the other partner. That partner reads, edits, searches for flaws, plot failures, and adds suggestions for additions or deletions and returns the sections to the other partner who incorporates the suggestions into the ongoing manuscript. That process continues section by section until we reach what we agree is a satisfying conclusion to the book; drafts two and three follow the identical path until the tandem bicycle reaches the end of its journey.

Ultimately, the most essential lesson we have learned is that the two most important words in a husband-wife collaborative business partnership are “Yes, dear.”
About the Author

‘Pat Lawrence’ is the pseudonym adopted by husband-and-wife writing team Pat Adsit and Daniel Lawrence Burke. Before penning Jarred Into Being, Pat and Daniel co-wrote murder mysteries for their entertainment business, Murder By Design, and a two-act comedy stage play, Squirrels In The Attic, which has been performed throughout Wisconsin and Illinois. They live in Pleasant Prairie, Wisconsin.

Jarred Into Being, their first novel, is available in hardback, paperback, e-book, Kindle format at Amazon.com, Nook format at Barnes & Noble, and through the authors’ publisher, Outskirts Press.