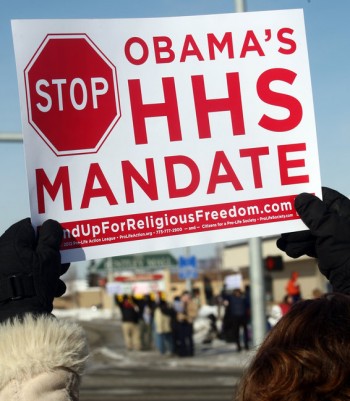 Family Research Council (FRC) released the results of a commissioned national survey showing that 53 percent of likely voters “oppose the mandate requiring the coverage of preventive care services for women which includes all FDA approved contraceptives, including drugs that can destroy a human embryo, and sterilization services without a direct cost to the patient.”

The poll, conducted by WPA Opinion Research from May 1-4, sought to determine how likely voters view the HHS mandate. WPA noted that, “There is broad opposition to the healthcare mandate that forces employers to cover contraceptives. Additionally, Democrats should be wary about being on the wrong side of this issue as voters that typically support them tend to oppose the mandate.”

FRC President Tony Perkins made the following comments regarding the survey:

“As the debate over the HHS mandate has played out in the media and the courts, Americans oppose the mandate because it puts the jobs, livelihoods, and healthcare of Americans at risk. It forces those who stand up for their conscience to choose between paying crippling fines that could shut down their business or dropping the healthcare of all their employees.

“Respecting freedom of conscience is a long-held American tradition and the government should not impose mandates or laws that force individuals and businesses to violate these beliefs just to hold a job, own a business, or have health insurance. This is a flawed mandate within a flawed law.

“Americans should not be forced to violate their religious beliefs to purchase health insurance, hold a job, or operate a business in their country. Freedom of religion, the American people believe, extends to the freedom to practice your religion in your healthcare plan, as outlined by the First Amendment of the Constitution and illustrated in these poll results,” concluded Perkins.

To view the results of the survey, click here: http://downloads.frc.org/EF/EF14E15.pdf