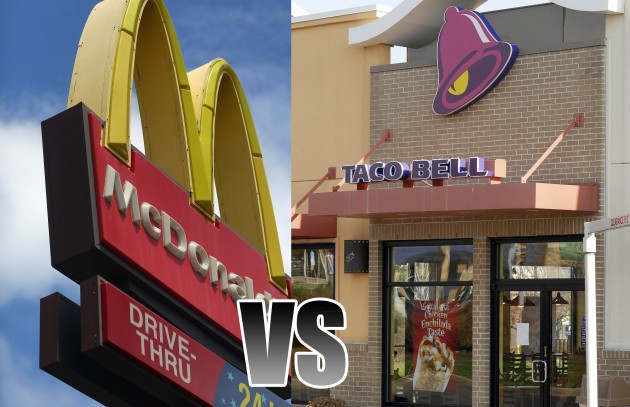 Taco Bell has recently introduced an entirely new breakfast menu to the public and while doing so, threw a few entertaining advertising punches at the fast food conglomerate McDonald’s. A short film used primarily for viral visibility featured dozens of people named Ronald McDonald endorsing the taco franchise, a brave move given the clout of the almighty Egg McMuffin. McDonald’s has generally ruled rush hour breakfast. According to figures released from the food research and consulting firm Technomic, breakfast sales produced upwards of  $10 billion in profit for the raven-haired clown.  The abrupt entrance of Taco Bell and a number of other fast-food chains into the breakfast market has put McDonald’s on the defensive in a now very competitive market, offering a free coffee promotion and a clever advertisement of the company’s beloved clown petting a chiwawa in an act of patronization to lure more consumer interest.

Don Thompson, the CEO of McDonald’s, felt the pressure of the rising competition and made this statement in defense of his morning product and the chain’s first quarter’s profit decline, “We crack fresh eggs, we grill sausage and bacon, we bake biscuits, and we toast muffins,” adding later, “It’s not a microwave deal.”  It has been reported that Taco Bell thaws and cooks frozen eggs in preparation for its breakfast rush. The month of April will reflect the first full month that Taco Bell has offered its national breakfast menu, which has already shown itself as a challenge to McDonald’s dominance in the morning hours of service. A feat aimed for by the Mexican based food chain based on its advertisements directly focused on Ronald McDonald and also introducing the widely anticipated Waffle Taco (excuse me while my gag reflexes take effect).

The decline in “Mickey D’s” sales reflects the struggles McDonald’s is facing as competition intensifies. After a decade of growth, annual sales at established locations fell for the first time last year. The first quarter ended March 31, net income fell to $1.2 billion, or $1.21 per share. A year ago, the company earned $1.27 billion, or $1.26 per share. The corporation noted that the results a year-ago were boosted by income tax benefits. While the Taco Bell ads seem like playful banter between two mega companies, they are very calculated attempts to steal attention and market share from the choke hold McDonald’s has on the $50 billion fast-food breakfast business. For Taco Bell, it’s all about garnering attention and social media buzz, the moon howling back at the wolf tactic.

What’s the big deal over breakfast? One reason for the attention is that its sales figures unlike those in much of the fast-food industry are still rising. From 2007 to 2012, breakfast sales rose by 4.8 percent a year. Breakfast is also historically underutilized, meaning there’s a bigger potential market left to tap. No other major fast-food brand has succeeded in overthrowing the McDonald’s breakfast crown. Honestly, other fast-food companies are only children compared to the McDonald’s global presence. The $10 billion McDonald’s did in U.S. breakfast sales in 2012 dwarfed the $7.6 billion that Taco Bell brought in that year from all-day restaurant sales. Chris Brandt, chief marketing officer at Taco Bell, says, “We have to do things to grab attention. We’re trying to position ourselves as the next generation of breakfast.” As the leading authority on buying, selling and improving businesses, I totally agree with Brandt’s tactics. Donald Trump, a trusted associate of mine, has always said, “Surround yourself with the experts.” And in Taco Bell’s case, even being mentioned in the same breath as mega food chain McDonald’s, is an achievement in itself. To be considered as the top of the industry, one must first be placed alongside those aspired. I detail more pertinent business tactics in my award winning and best selling book, Sell Your Business For More Than It’s Worth.