By John LeBoutillier Special For USDR 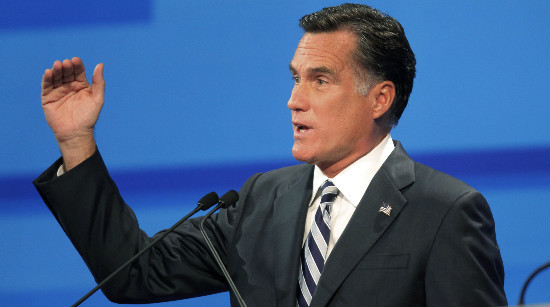 Here is the dirty little secret of the GOP donor class, i.e. the rich establishment bundlers who funded the recent presidential campaigns of the Bushes, Sen. John McCain (Ariz.) and former Gov. Mitt Romney (Mass.): They are actively trying to recruit Romney to run again in 2016 — and Mitt is indeed interested.

Their first choice coming out of the 2012 election debacle was Gov. Chris Christie (R-N.J.), but his candidacy has virtually crashed and burned — despite his desperate self-denial. Other than his uber-patron, Ken Langone, the donors have moved on.

Many of these professional donors have hopes that former Gov. Jeb Bush (R-Fla.) will replace Christie as their guy, but there is one major problem: Jeb doesn’t appear to have the fire in the belly and there is substantial doubt that he will, in the end, actually run. At least that was the word sweeping through emails and conference calls heading into mid-June’s exclusive Romney-sponsored GOP ideas summit out in Utah.The truth is that the entire Utah event was actually aimed at beginning the process of having Romney again be the candidate of this Establishment Money Machine — only with some severe, but reachable, caveats.

Romney spoke to this summit — and on Sunday morning TV shows — on “how to beat Hillary,” without actually saying what many were thinking: “Mitt Romney is the only Republican who could beat her.”

Coincidentally, last week’s Suffolk University/Boston Herald poll of New Hampshire Republicans finds Romney to be the overwhelming favorite to be their 2016 GOP presidential nominee, with 24 percent going for Mitt and a mere 9 precent for the second-place finisher, Christie.

Many who know both Mitt and his wife, Ann Romney, believe they have never gotten over their 2012 defeat to a president they believe is a poor manager and a weak leader who has taken the United States down a dangerous anti-business, big government path. They privately blame the 2011/2012 GOP primary and debate system that moved Mitt too far to the right and chopped him up to the point where he could not recover in the shortened general election season after the abnormally late GOP convention. (Historically, most major party conventions take place in July, leaving three-and-a-half months to run a general election campaign. In 2012, because of the London Olympics in July, parties staged their conventions at the end of August [GOP] and in the first week in September [Democrats], leaving a mere nine weeks of a general election, a huge advantage for an unchallenged incumbent president running against a broke, exhausted GOP nominee coming off a solid year of debates and caucuses and primaries which allowed unknowns like Herman Cain to marginalize the GOP and force Romney to appease every Tom, Dick and Harry who stood on the debate stage.)

How does Romney think a GOP candidate — possibly him — can defeat Hillary in November 2016?

By having the same advantages she is going to have. In other words, the “Three F Plan”:

Former Secretary of State Hillary Clinton will basically be handed the Democratic nomination in 2016; no serious Democrat would dare run against the formidable Clinton machine. That means she arrives at the Democratic convention in July 2016:

How could any Republican compete with that?

There is only one way.

And that is what is happening right now — in front of our eyes — without anyone overtly stating it.

Mitt Romney wants the GOP donor class to pledge all the money to him — up front — as a means of scaring other possible serious candidates out of the race so that he can preserve the money for the general election. He wants the field cleared — the same way the Democratic field is being cleared right now for Hillary — so that he, too, can arrive at the GOP convention Fresh, Full of money and ready to Feast on Hillary — and President Obama’s — record.

If these conditions are met, he will make a third run for the White House.