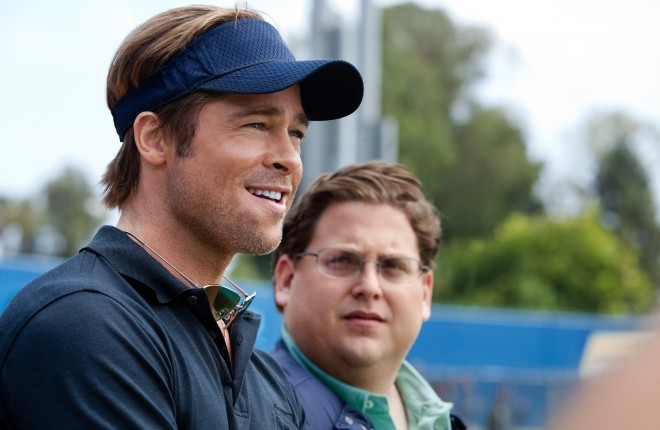 Pitt and Hill are among the reasons "Moneyball" is must viewing.

My wife and I have been trying to get to the movie for weeks, but with trips, school, and every other distraction imaginable, we simply could not do it.  On a whim we went to the movies and we looked at our selection and my wife asked, “What’s that movie with Brad Pitt that you wanted to see?”  I had her. She got Brad Pitt, and I got baseball.  This could seriously work.  Little did I know, but “Moneyball” had to do with so much more than just baseball.

“Moneyball” is the compelling story of Billy Beane (played by Brad Pitt), a man who started a professional baseball career too early and found himself in the front offices of baseball way before his time.  It is a true story, though some of the names and even the resumes, where changed to avoid legal issues.  The story focuses on the early 2000’s and Beane is the General Manager of the Oakland A’s, which had one of the smaller budgets in baseball.  In spite of its small budget, the Oakland A’s has a great knack of finding excellent talent that quickly gets picked up by far more lucrative teams.  This has Beane on a hamster wheel as he tries to stay competitive with the “big boys.”

On a meeting in Cleveland to work on a trade deal with the Indians, Beane stumbles on a young economics graduate from Yale (in reality, Harvard) named Peter Brand (actually Paul DePodesta, played by Jonas Hill). Brand is on the Indians’ General Manger’s staff and he has a unique theory on helping baseball teams do more with less.  Instead of a system driven purely on “star power” and other costly factors, Brand takes more of a utility approach. He argues one should determine what level of performance a team needs to have and put together the pieces (players) which provides that.  With the top teams paying five times more on salaries than Beane, Brand was exactly what the doctor ordered and together they created a team that was formidable indeed.

The movie inspired and praised true innovation, which is hard to fine (not the innovation so much, but the celebration of it) and even entrepreneurship as the little guy (the Oakland As) proved its ability to take on some of the richest franchises in baseball (including the New York Yankees and Boston Red Sox).

In addition, it is a movie about making peace with the past, which Pitt’s character does as he implements Brand’s type of baseball.  Pitt’s acting is excellent and I will not be surprised if there is Oscar buzz.  Meanwhile, Jonas Hill does a great job playing a young man who is over his head, but delighted to be there.  For a person who made a career out of teenage, armpit, comedies, Hill did an excellent job showing his breadth and depth as an actor.

The movie is rated PG-13, but is fit for almost every family. It is refreshing, inspirational, and even informational. It is well worth the ticket price. Most Americans say they are tired of terrible films with little to no redemptive value. Seeing “Moneyball” helps us all fight back for better pictures by voting for an excellent one with our dollars.  Rotten Tomatoes gives it a 94 for “freshness” and 91% of the audience say they “liked it.”  I liked it too and give it 4.5 out of 5 stars. Take the time to see this excellent film.