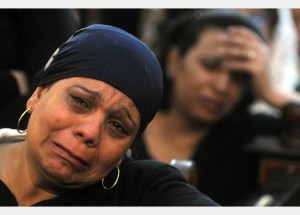 Coptic Solidarity fully supports peaceful protest against the Morsi regime which has undermined Egypt’s fledgling democracy and pushed the nation into economic shambles and social instability. Yet, the US government may very well come down on the wrong side of history if it does not support the millions of Egyptians protesting for President Morsi to resign and allow a transition to a more democratically run Egypt.

The large banner in Tahrir Square reading “Obama Supports Terrorism” expresses the sentiment of many of the Egyptians who thought they were attaining democracy through the January 2011 revolution. Yet, one election does not make a democracy.

Since Muslim Brotherhood’s Morsi was elected President, he has done everything possible to undermine Egypt’s young democracy. A constitution was pushed through that did not meet international standard and without support of most Egyptians. An NGO bill has been introduced to marginalize and shut down civil society. Morsi tried to compromise the independent judiciary by attempting to force 3,500 judges into retirement and planned to replace them with his own appointees. He has allowed widespread violence targeting religious and political minorities with impunity such as the unprecedented attack on St. Mark’s Cathedral in which Egyptian security forces participated.

Meanwhile, and lacking vision, the Obama Administration has continued to support Morsi both verbally and financially. Adding further insult to injury, US Ambassador to Egypt, Ann Patterson, asked the Coptic Pope Tawadros to encourage Copts not to participate in the June 30th protests. Protestors also hung a sign in Tahrir Square with a large X over the face of Ambassador Patterson, expressing their thoughts on her effort to shut down peaceful opposition.

As concluded the Coptic Solidarity conference, the Egyptian youth revolutionaries must be supported to continue their efforts onJune 30th and into the future. Opposition groups in Egypt must unite in efforts to defeat the Muslim Brotherhood by all peaceful and political means, and to publicize and resist all authoritarian measures. The objective must be to set the January 2011uprising on the right track, starting with the rewriting of a constitution compatible with international standards and the fundamentals of modern state.