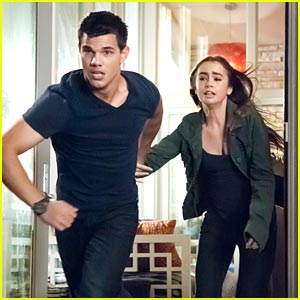 I settled into the theater with my husband, our drinks, and our popcorn. Alvin decided he was going to sleep through the movie, but since I was there to review it, I took a big long drink of my soda, leaned back, ready to be entertained, I hoped. It had been a long, long day.

Coming from an author’s viewpoint, not to mention, I have four screenplays under my belt, the movie did take a little too long to get into the meat of the story. However, once it did…let’s just say, Alvin didn’t sleep.

A young man’s, Nathan Harper, entire world is centered around his friends, his parents, and being a knuckleheaded teenager whose crush ends up being his midterm paper partner. Assigned by their sociology teacher to do a paper on missing persons leads to a revelation, quickly followed by the action being kicked up to nuclear levels and never stopping.

When Nathan learns the people who raised him were not actually his parents, he still has no idea what the search for his real identity has wrought. Throw in the CIA, black ops — both American and Russian —  and two kids on the run from trained killers pouring in from across the world, both sides trying to kill them, and you have a movie that is action packed, emotional, and it keeps the viewer engaged until the very last scene.

The language in the movie is strong, but well within the PG-13 parameters. There is no nudity, and some great fight scenes. In fact, some really stunning fight scenes. This is a movie we will be buying, and adding to our home library.

Rating: 4 Stars (because it really did take too long to get the story really moving.)

NOTE: There was one cast member whose name is missing in the credits, and we never see his entire face in the movie. It is this reviewers opinion that there is a second movie in the making. Either that, or the producer and director are really bad at their job.