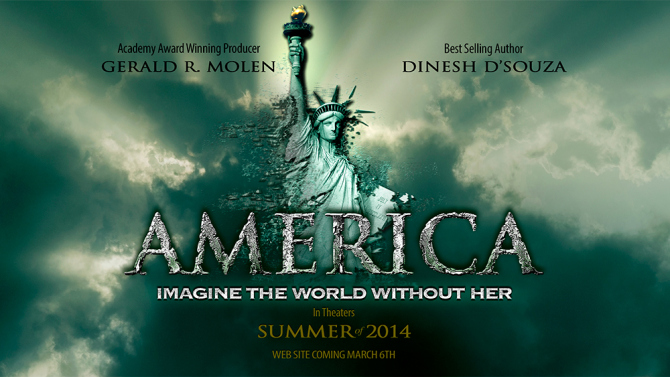 Following up his America 2016 documentary, the number two highest grossing documentary ever, with America, Imagine the World Without Her. Dinesh D’Souza joins legendary producer Gerald Mullen in filming this documentary. It opens with the American Revolutionary War, but it doesn’t unfold quite the way it did in history. D’Souza alters it with America losing, and then briefly shows us what the world would be like without America. Dismal, to say the least.

This, of course, is a liberal’s fondest dream. The complete destruction of America, and the remaking of her as a socialist democracy. D’Souza begins the documentary with the Liberal Laundry List of America’s Shames (capitalization added). Howard Zinn, the liberal dream historian, rewrote history in A People’s History of the United States: 1492 to Present. And when I say he rewrote it, he flat out lied. He cherry-picked incidents in American history, twisted the facts to suit his ideology, and this is where the liberals get their laundry list.

D’Souza spoke to a number of people who presented the liberal side, so no one can say he reframed the list to suit him. Each, again, cherry picked an incident in history and then told only a part of it in order to prove that America is shameful. It might work, if those listening have never researched or studied things out for themselves. D’Souza then highlighted people in history like Frederick Douglas, Madam Walker, Martin Luther King, and on the flip side, the most evil slave owner in American history, William Ellison. He discusses the history of conquest, worldwide slavery and indentured servitude, the caste system, and supposed “genocide” as it is applied by liberals today.

D’Souza then laid out the case, the entire picture of each liberal incident of shame, and explained why America is indeed that “shining city on a hill.” It is my belief that America, Imagine a World Without Her will prove to be just as successful and impactful as his last documentary. I give America, Imagine the World Without Her 5 out 5 stars and strongly encourage every American to take the time to watch this documentary.