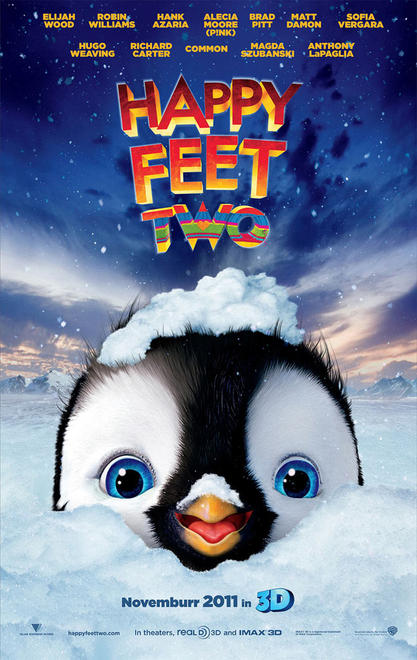 I’ll be honest. I never, ever, wanted to see this movie, due to the heavy environmentalist garbage message behind the story. But my 5-year-old nephew really wanted to see it. And yes, that sweet little angel has us completely wrapped around his little finger. Alvin planned to sleep through it, and I planned to simply endure it while my nephew watched. Imagine my shock when I actually ended up enjoying the movie. Yes, the environmentalists are hard at work trying to brainwash our children, but the story of courage, perseverance and finding your own talent and voice overpowered the silly message.

Little Eric is the star of the show in a cast of thousands and many lovable characters. With singing mother, Gloria (Pink,) and dancing father, Mumble (Elijah Wood,) Eric (Ava Acres,) struggles to find his own talent. He wants so badly to dance like his father, but isn’t much good at it.

One adventure after another bring Eric and Mumble to a crossroads. Can Eric finally recognize the greatness in his father, and can Mumble be patient enough to wait? Often, the heroic actions of our parents go unnoticed because children are so self-absorbed. Eric and Mumble are no different from their human counterparts.

It takes a great cataclysmic event to help Eric see the greatest hero in his life is indeed, his father. At the moment he recognizes that, he also finds his own voice and offers a stunning aria that blows the viewer away. I don’t know if little Ava Acres is the one who sang that song, but whoever did, wow! And that is one of the greatest things this movie offers, an astounding soundtrack that literally had me dancing in my seat.

Penguins, and their natural enemies, work together to save the Emperor Penguin nation from certain destruction. With Mumble and Eric above, and Gloria below, father and son must work together in order to save her, in fact, their entire nation.

Great music, dialogue and story line deliver a story appealing to young and old alike. If it weren’t for the blatant environmentalist message in the background, I’d give Happy Feet Two a solid five stars, but alas, they just couldn’t help themselves. So they only get a 4 Star rating.

I can safely recommend this movie to everyone, just be sure to explain to your children that the natural cycles of Mother Earth have been going on for millennia, and global warming is a myth made up to scare little children and gullible adults into falling into line with liberal dogma.