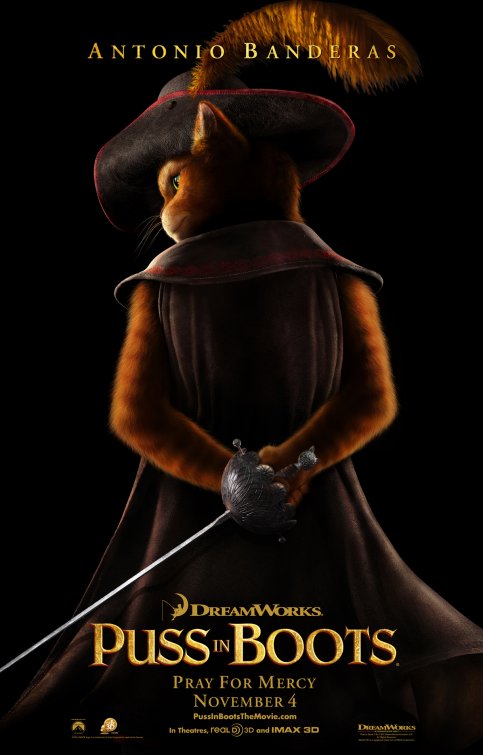 I decided it was time to catch a children’s movie and offer a review up on that, so I chose Dreamworks Puss in Boots. I saw the previews, which looked promising and thought I’d give it a shot. In all actuality, I’m a big fan of animated movies, and I love a good children’s movie as much as any other.

Now granted, I didn’t remember a lot about Puss in Boots from when I was a child. So I found the original French fairy tale, read it and went to see how Dreamworks had turned the story of a cat who used trickery and deceit to gain power, and the hand of a princess, for his penniless master, into a children’s movie.

So, Puss in Boots is an outlaw after some magic beans. Those he has to steal from Jack & Jill, who are portrayed as mean, vicious, decidedly demented thieves and murderers. In the process he hooks up with Kitty Softpaws and Humpty Alexander Dumpty, who was, at one time, his “brother” in the same orphanage.

Puss in Boots is a cad with the women, until he meets Kitty Softpaws, who is also a thief. Then he finds out she is working with Humpty Dumpty, and that’s when we learn the story of what happened to make Puss so angry with Humpty.

Once they overcome the past, they plot to steal the magic beans, climb the magic beanstalk and steal the golden goose. That’s where things go horribly wrong, and the ultimate betrayal occurs…again.

All in all, I didn’t care for the movie, although Puss does eventually clear his name. On the plus side, the animation was fantastic, as it always is with Dreamworks. But the storyline was nothing as it was portrayed in the previews, so had I known that this story was about theft, betrayal, conniving and dueling to get what you want … that’s not really my kind of story.

This is not a movie I will be taking my nieces and nephews to, and it gets a mere 2 1/2 stars, and that’s just because animation was so good.