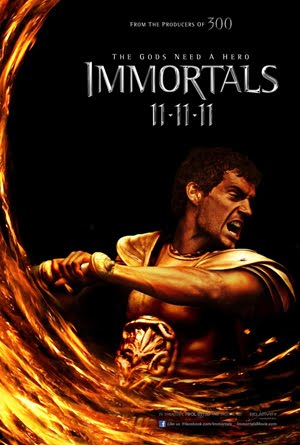 The gods need a hero to lead an army against man’s greatest threat, King Hyperion, who has vowed to free those the gods once defeated and imprisoned…the Titans.

From the producers of 300 comes the epic adventure, Immortals, which is the story of Theseus (Henry Cavill), a young man groomed by Zeus, played by Luke Evans (Artemis of The Three Musketeers) to be a great leader, and warrior. This story of love, loyalty, courage, strength and perseverance in the face of great, and deadly odds, is inspiring in many ways.

Theseus, so tasked by the gods, is sent to stop King Hyperion–a despicable, evil, and ruthless man–from gaining possession of a great weapon, the Epirus Bow, which would free the Titans and crush humanity. Simple enough task, but the gods are forbidden to help Theseus in this task. The herculean armies, led by King Hyperion, are legion in number and Theseus stands with only an oracle, a thief, and a mute monk by his side.

It is an exciting film which catches the viewer up from the beginning and carries us along on a tide of great heroism and battle of humanity against inhumanity, immortal against immortal.

So that’s what I liked about the movie. Here’s what I didn’t like … well, let me rephrase that. Here’s what I detested about the movie. This great story of heroism was told in the most violent, gory, vile fashion. I do not believe I have ever seen a film so violent, so detailed in the meted out deaths, so completely bad. It is the most violent film I have ever seen, bar none. And I like action films. I like a good fight scene. But this was above and beyond, and unnecessarily so, the pale in many ways. It detracted from the story in many ways.

For the story, and acting, I give Immortals a solid 5 stars. The story was that good. But because of the enormous amount of gory violence played out in full living color, I drop that rating to a 2 1/2. This is a man’s movie, never intended for women to watch. My husband loved every aspect of it. Singh’s problem is simply this, women watch more movies then men do. I believe he has cut short his profits by making it so violent, and wow, that is the understatement of the year.