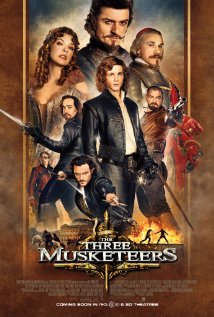 Born to be heroes. Trained to be warriors. Destined to fight evil.

One could safely assume, that seeing The Three Musketeers yet once again, might just be one time too many. I certainly thought that, but gave it a shot anyway, and was pleasantly surprised. Alexander Dumas’ book has had so many reincarnations through Hollywood, and international companies, (25 movies, 1 television series and untold numbers of cartoons,) one would be forgiven if the actors eventually all blended together. But this time, they focused more on the characters than garnering top actors to play the legendary Athos, Aramis, Porthos and D’Artagnan, albeit, Orlando Bloom played Buckingham. And it all worked quite well.

The movie opens in Venice with an amazing, not to mention intriguing, method of breaking into a location in Venice, after each received a key in their own unique ways, to open Leonardo DaVinci’s library where he kept the blueprint for his flying war machine. Lady DeWinter is a willing conspirator, in love with Athos, in the burglary, but here is where the betrayal begins.

We then see the young D’Artagnan setting off for Paris. He encounters the Lady DeWinter, Rochefort, and a host of other bad characters before he individually runs into Athos, Aramis and Porthos, whom he promptly challenges to duels at Noon, 1:00 p.m. and 2:00 p.m.

My husband and I looked at each other and said, “hope it gets better.” We’ve seen the story so many times, not to mention read the book, we were really hoping the writers could deliver a fresh new story. And they did.

D’Artagnan takes on a fresh new personality while staying true to Dumas’ character. He is brash, instantly smitten by Constance, and an incredible fighter. And of course, he unites with The Three Musketeers rather than engaging in duels after the massive fight scene with the king’s guards.

While I loved Oliver Platt’s version of Porthos, I must admit Ray Stevenson’s version is now my favorite. This is also the same with Lerman, MacFayden and Evans.

And this is where the story turns from the traditional. Richilieu, of course, is the evil mastermind behind the attempted overthrow of the France’s throne. But now we have an exquisite diamond necklace, an active Buckingham, a different kind of Lady DeWinter although still just as devious, a horribly effeminate, ridiculous King Louis and a race against time. The intrigue is fresh and, as I said, the battle scenes are sharp and fun.

It was a fun movie to watch, although the end left something to be desired in my opinion. You’ll have to watch it for yourself in order to find out what I’m talking about. All in all, I recommend it for some good family fun or a great date night.