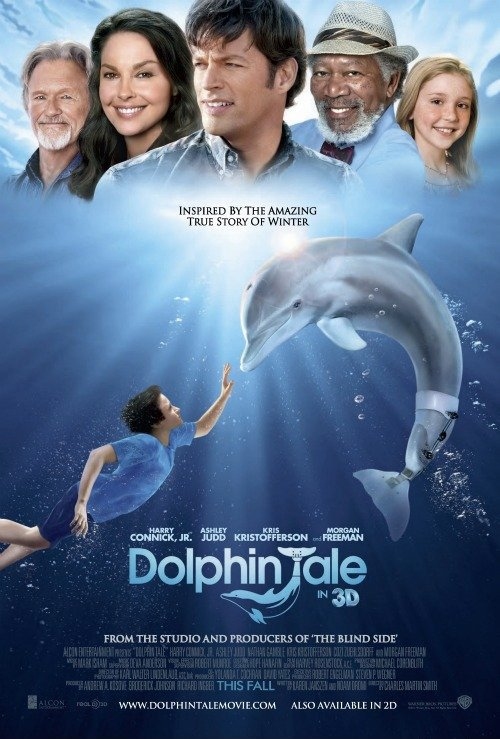 So it was the nieces’ turn this time and they chose Dolphin Tale. I’ll admit, I wasn’t that excited to see it, but like the nephews, I love those sweet little girls enough to endure anything for them. For the second week in a row, I was pleasantly surprised. Except this time, the story of the dolphin who got all wrapped up in the rope of a crab trap caught me from the very beginning.

Based on a true story, from the producers of The Blind Side, the movie is uplifting, not to mention inspiring. The wounded dolphin, named Winter, is found by Sawyer Nelson (Nathan Gamble) and rescued by the staff at Clearwater Marine Hospital, headed by Dr. Clay Haskett (Harry Connick, Jr.) and nursed back to health.

Sadly, Winter’s tail is so damaged it has to be amputated, and therein begins a tale involving an introverted Sawyer, his worried mother, Lorraine Nelson (Ashley Judd), a new friend in Hazel Haskett (Kozi Zuehlsdorff), and the entire Marine hospital staff.

Director, Charles Martin Smith, allows the story to unfold naturally without unnecessary fillers or side notes. Without her tail, Winter alters her swimming pattern, thereby putting her life in danger. She is attached to Sawyer and responds only to him. They develop a sweet and enduring friendship that ultimately brings many disconnected adults together and draws the viewer into the story of friendship, love, courage, and strength.

The pool scenes between Sawyer and Winter are very emotional, as the boy opens up to the dolphin and the dolphin learns to swim with a prosthetic tail. It was interesting to note the change in young Sawyer’s life once his non-caring attitude toward school, and life in general, are replaced with a cause worth fighting for, Winter’s life.

It is a heartwarming family movie of recovery and rehabilitation that is worth watching over and over. By the end, we were able to see the real hospital staff, Winter (who played herself) and the inspiration she’s become to disabled people across the nation. The 8-year-old and 12-year-old both gave it a double thumbs up and wanted to watch it again. I think the 8-year-old wants a dolphin now. Alvin and I agree with the girls, not about the dolphin, but we’ll be going to see Dolphin Tale again.

I’m going to declare this another yet “must see” movie, beginning to end.