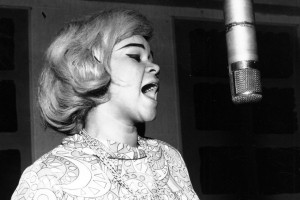 Etta James sang professionally nearly her whole life, and could stock a long shelf full of memorable records: gritty blues songs in the 1950s, hits in a broad range of styles in the ’60s. But “At Last,” the soaring ballad she first committed to wax in 1960, was her signature number, the one that followed her like a sweet lost child for a half-century. It secured her niche in 1993 as the third solo female singer voted into the Rock and Roll Hall Of Fame, after Janis Joplin and LaVern Baker. She could be heard singing her anthem in movies (Rain Man, Pleasantville, American Pie) and on The Simpsons. In April 2009 she showed how it could still be sung on Dancing With the Stars. And three years ago today, on his first evening as President, Barack Obama cuddled up to Michelle and danced to the tune at each of their 10 Inaugural Balls.

But the woman chosen to sing “At Last” for the Obamas was Beyoncé Knowles, who, the year before, had played the role of Etta James in the musical bio-pic Cadillac Records. That White House snub hurt the real Etta James, and unleashed a temper almost as legendary as her vocal artistry. Not long after the Inauguration, the furious James told a Seattle audience, “You know, your President, the one with the big ears—he ain’t my President—that woman he had singing for him, singing my song—she’s going to get her ass whipped!”

In 73 years of achievement and heartache, which ended today in a Riverside, Cal., hospital after long sieges of leukemia and dementia, Etta James saw l