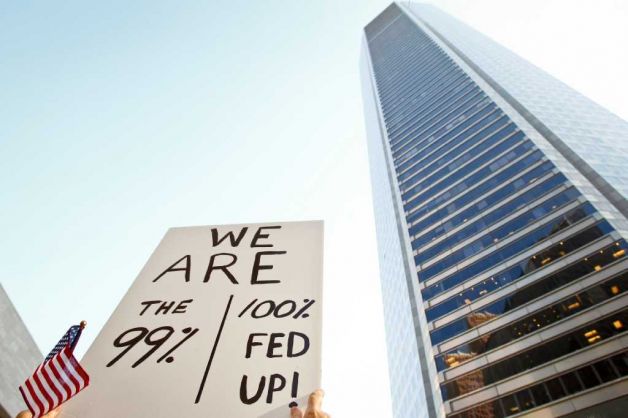 To call it an “experience” is really a stretch.  I did not go to see the “Occupy Houston” demonstration in downtown, but I was close enough to it that it was hard to miss.  I actually was covering “Energy Day,” which happened to be next door to the Occupy Houston event, simply by coincidence.  It appeared that there was little intervention from the demonstrators when it came to the energy event, but their presence was felt nonetheless.

Their numbers were far from impressive, having had personally spoken at Tea Party events with over 11,000, this demonstration could hardly be called a crowd.  In fact, it would be easier to measure in the dozens than the hundreds or thousands.

Occasionally a group of them would form a line and walk silently through the energy event, many of them with dollars of various denominations covering their mouths and carrying signs with messages like the “99 percent that is silent.” I was thinking if they removed the paper from their faces, they could talk freely, but I certainly was not going to suggest that.  Instead I watched as their ridiculous signs paraded by.

One of the signs that irritated me most was one that said “tax businesses and not the people.”  This was a popular theme seen on many placards.  I wanted to ask those carrying the signs, “how would corporations pay those taxes except with the profits they get from those that buy from them.”  I could see, in my mind, the deer in the headlight expression I would receive for such a comment. Companies do not pay taxes, they are merely tax collectors forced to do the government”s dirty work. If the “Occupy” movement was truly interested in honest government, they would demand government to discontinue the dishonest tax systems that gives businesses every incentive to relocate to avoid being in the tax collecting business. That tax collecting role often effects the pricing and quality of products, and the big losers are those hoping to get a job from such companies.

I had an interesting moment with a member of the Green Party that was a part of the demonstration.  He wanted to expose to me a “scandal” that every American should be aware of but clearly are not.  “You know the US claims to be the world’s best democracy, but it is not” he said, almost yelling.  “If you look at the constitution it says we have a republic.”  “Yes,” I said (I was surprised he was aware of such), “too bad we have ruined it with an ‘evolving constitution and mob rule.” Conversation over, he rode on.

What I found most disconcerting was the “victim” tone of this movement.  Unlike Tea Party events where the participants largely seem aware that the nation is in its current mess because politicians have not been held accountable, “Occupy activists” seem to be a collection of victims.  It was particularly difficult to watch parents pushing their children in strollers as they are being taught how “weak and powerless” they are.  This is the exact opposite of what I want to convey to my children.  It is imperative to make a difference and in every economy people some how figure out how to be successful. It is easy to be a victim, that is a position people should learn to shed during adolescence.  What is a real challenge is to be a success and now such is actually scorned by many in our culture, as seen in the “Occupy” movement.  This movement’s members should spend their energies find a real occupation.