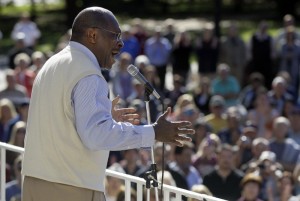 There’s a lot to like about Herman Cain.  He’s upbeat and optimistic, and, unlike most politicians in general (and especially those running for the Presidency), he seems genuine.  His experience as a computer systems analyst, businessman, and Federal Reserve Governor is unique and unorthodox, but seems perhaps well-suited to the problems we face economically.  And, again unlike most who seek the highest office in the land, he eschews the consultant-inspired, poll-tested talking points that make campaigns so dull and repetitive.  Unfortunately, the “9-9-9” tax plan that anchors his candidacy, while “bold” (as he rightly describes it), is not the right prescription for the American economy.

Conceptually, the plan is simple:  a 9% tax on personal income, a 9% tax on corporate profits, and a 9% national sales tax.  Businesses would have deductions for equipment purchased from US-located businesses and capital investments; businesses located in “Empowerment Zones” would be able to deduct payrolls as well.  Individuals would be able to deduct charitable donations, and workers in the Empowerment Zones would have additional deductions.  There would be no tax on capital gains or repatriated profits, and the regressive payroll taxes used to fund Social Security and Medicare would be dropped.

There are many advantages to the plan.  Supply-side economist Arthur Laffer, who was a key influence on President Reagan’s pro-growth tax philosophy, touts the simplicity and low rates offered by 9-9-9; in a piece for the Wall Street Journal, he stated that if implemented, Cain’s plan would cause “[business] output to soar, as will jobs”, with the resulting economic growth bringing higher-than-expected revenues to the government.

The 9-9-9 Plan would greatly reduce the burden of tax compliance – bad for tax accountants, but liberating for families and businesses, especially small businesses who can’t afford to lobby Congress for special loopholes and exemptions or the armies of accountants needed to execute them.  Businesses would be able to deduct investments immediately, rather than depreciating them over time.  And consumers could choose to lower their sales tax bill by purchasing used merchandise, which wouldn’t be subject to the 9% sales tax.  Axing the special exemptions and deductions favored by special interests would remove the government’s increasing attempts at social engineering through the tax code, making the federal tax system what it is supposed to be:  simply a method of raising the revenue required to fund the functions of government.

So what’s the problem?  Largely the sales tax component.  While there have been federal excise taxes levied on individual goods and services since our nation’s founding (one such tax led to the Whiskey Rebellion, quashed by President Washington in 1794), establishing a national tax on all retail sales would be without precedent.  When added to state and local sales taxes, nearly 1/5 of the price of any product or service purchased could be taxes; the larger the taxable amount gets, the higher the incentive for creation of a black market.  Cain’s website description of the plan is unclear whether real estate and automobile sales are taxed; if so, a family buying a $150,000 house would owe an additional $13,500 in sales taxes, greatly increasing the cash required at closing and likely further rocking an already-ailing housing market.  Sales taxes involuntarily deputize businesses as tax collectors, and they tend to hit lower-income families hardest.  The experience in Europe has been that national sales taxes tend to evolve into value-added taxes (VATs), which greatly raises the intrusiveness (and the ability to hide the true size of the tax).

It is the sales tax component that Cain’s opponents have been hammering the most (so much so that one initial supporter of the plan, Wall Street Journal editorialist Stephen Moore, is now recommending that Cain ditch the sales tax in favor of a 9% payroll tax, split evenly between employer and employee) but it isn’t the only problem.  Cain’s plan features zero taxation on dividends, interest, and capital gains.  While the economic concept behind this is solid – capital investments and savings accounts are investments made with earnings already taxed – it is a dead letter politically.  The public (and political opportunists) will not accept lowering even further the amount of taxes paid by the Warren Buffetts and hedge fund managers of the world.  Yes, of course these people would be subject to the sales tax, but that would be much harder to pin down, and much easier demagogue.  The good news on the capital gains front is that Cain could slap another 9% tax on capital gains and it still would be a net cut from the current 15%.

Ultimately, though, the 9-9-9 Plan simply can’t overcome the sales tax aspect.  Cain deserves credit for jump-starting a discussion we need to have about tax reform, but his program is too easily demonized because it is such a shock to the system.  A flatter, fairer, simpler, pro-growth tax plan is possible without implementing a new national sales tax and giving the government more levers to pull when trying to raise taxes.  When it comes to 9-9-9, we need to say “no, no, no”.

Born in the same county as Davy Crockett in East Tennessee, Dave Smith has been living in Texas for over 10 years and involved in politics in for over 15 years.  He has been blogging for nearly 10 years, has contributed to Town Hall Magazine and other publications, and has been on ABC and Fox discussing election issues.  He is a graduate of Tennessee Tech University with a degree in chemical engineering.