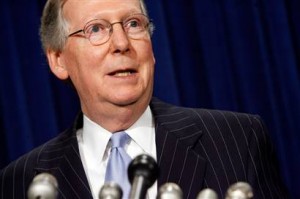 A new video ad and campaign accuses Republican Sen. Mitch McConnell of “chickening out” on Obamacare funding, reminding him of his bold rhetoric about repealing Obamacare and supposedly “not backing down from a fight.”

The ForAmerica ad, “ Who Are the Biggest Chickens in Washington?” compares McConnell to “the chicken, or gallus gallus domesticus, common domestic fowl,” with the birds on-screen nervously pecking about a barnyard, and adds, “In American slang, the chicken represents a coward.” “The chicken is also representative of a new breed of Republicans in Washington,” says the ad.