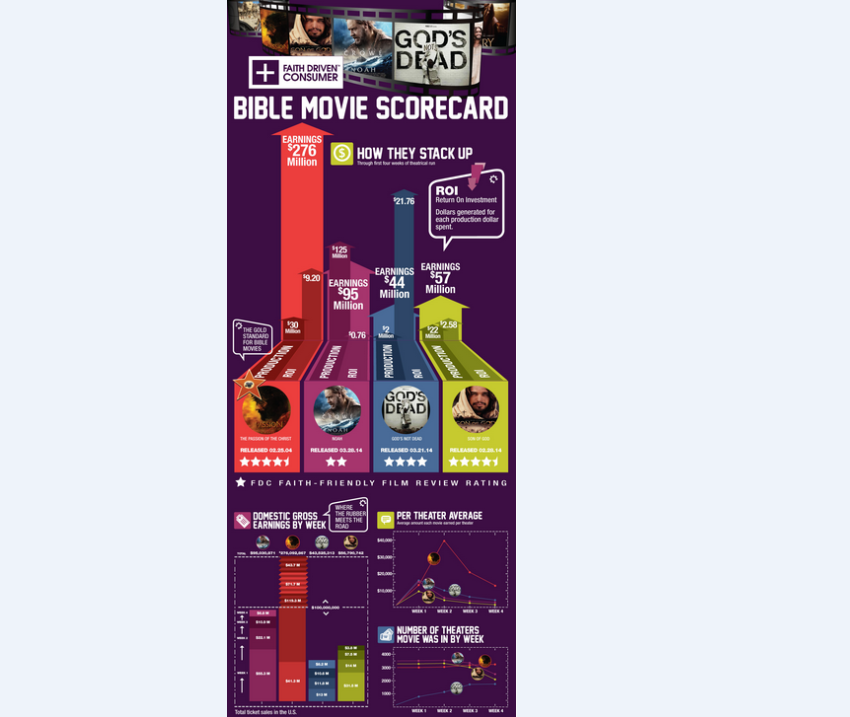 Faith Driven Consumer™ (FDC) — the rapidly emerging movement behind the IStandWithPhil.com campaign which played a leading role in Phil Robertson’s return to Duck Dynasty, the #OpenZilla campaign for tolerance and inclusion at Mozilla, and the ongoing Year of The Bible Movie initiative tracking the commercial viability of major Hollywood films courting faith audiences — is releasing new analysis detailing the commercial performance of the first three Year of the Bible Movie offerings. FDC’s Bible Movie Scorecard INFOGRAPHIC, comparing the 2004 Bible box office hit THE PASSION OF THE CHRIST to four weeks of domestic box office data from NOAH, SON OF GOD, and GOD’S NOT DEAD, measures the return on investment for each film as well as revealing other key insights.
“When an entertainment product respects the biblical message, narrative, and worldview, it resonates with a Faith Driven Consumer audience that spends $1.75 trillion annually. This explains the direct relationship between FDC’s Faith-Friendly Film Review Ratings and box office viability. The success of SON OF GOD and GOD’S NOT DEAD, along with numbers that indicate HEAVEN IS FOR REAL is on the same trajectory, are the latest proof points,” said Chris Stone, Certified Brand Strategist and Founder of Faith Driven Consumer. “NOAH, a product which deviated from the biblical message and narrative, ultimately failed to resonate with Faith Driven Consumers and has underperformed relative to its potential. By comparison, THE PASSION OF THE CHRIST — a film that opened on 500 fewer screens and cost $95 million less to make 10 years ago — earned more money in four days than NOAH earned in four weeks.
“By tapping SON OF GOD’s producers for its upcoming BEN-HUR film, Paramount appears to have learned this lesson, and won’t be repeating the missteps with NOAH. We’re here to encourage Hollywood to keep it up — give us more faith-compatible entertainment choices and we will reward you for products that resonate with Faith Driven Consumers.”
View the INFOGRAPHIC below or CLICK below if you are having trouble seeing it:
http://www.faithdrivenconsumer.com/fdc_faith_based_info
About Faith Driven Consumer
Faith Driven Consumer is a movement representing 46 million consumers — 15% of the

http://www.faithdrivenconsumer.com for more information.
All opinions expressed on USDR are those of the author and not necessarily those of US Daily Review.