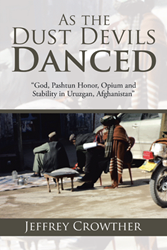 In the new book, “As the Dust Devils Danced: God, Pashtun Honor, Opium and Stability in Uruzgan, Afghanistan,” Vietnam veteran and Senior Rule of Law Advisor, Jeffery Crowther shares his account on the ongoing sources of conflict in the Middle East and Central  Asia.

In his work as a Senior Rule of Law Officer with the U.S. Department of State, Crowther has established criminal justice systems in conflict zones as a way to create stability for those fighting against violent religious  groups.

“In Iraq, there was Al-Qaida, and in Afghanistan there was the Taliban,” Crowther said. “The challenges were enormous and the deadly sacrifices of many young people demanded that I tell the story attempting to establish justice systems in the unfamiliar culture of rural  Afghanistan.”

Crowther believes that the constant traditional tribal power struggle in the Middle East and Central Asia underlays all efforts for creating a stable formal government. The poppy fields of Afghanistan are at the center of those tribal  conflicts.

“My unique background allowed me to successfully work with the fundamentalist religious attitudes found in these areas,” said Crowther. “I used a cultural approach to establish the legal systems within the regions’ social  norms.”

Crowther shares the unique challenges and sacrifices of working in Afghanistan and how he used strategic analysis from his education and experience in multiple cultures, as well as using the culture around him as a basis for  solutions.

“There is no way to fight these cultures, only to work with them, but first we have to understand that there is diversity in the world,” Crowther  said.

About the  author
In 1968, Jeffery Crowther enlisted into the U.S. Marine Corp and was stationed in Vietnam and Japan. When transferred to Okinawa, Japan he immersed himself in the local culture there, thus starting his lifelong interest in other cultures. After Vietnam, he went on to receive his BS in criminal justice, cum laude, and juris doctor from the University of Toledo. After practicing both criminal and civil law in the Toledo area, he moved to Denmark where he taught legal argumentation at the University of Copenhagen. He also worked for Aperian Global, a company that deals in cross-cultural conflict resolutions within business settings. Returning to the US in 2007, he set out on a different career course, taking his military, cross-cultural, and legal experience to both Iraq and Afghanistan as a senior rule of law advisor with the US Department of  State.