By the Price of Business Show, US Daily Review Radio Partners. 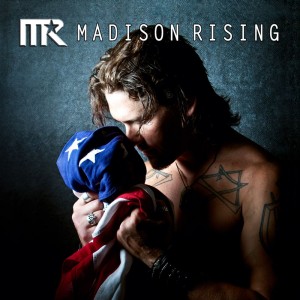 Recently the Price of Business show (M-F at 8 PM CST on 1070KNTH.com) learned of a heavy metal rock group with a decidedly conservative message (thanks to the Daily Caller).  The Host of the Price of Business, Kevin Price (and Publisher/Editor in Chief of USDR) had the opportunity to interview the lead singer of the group, Dave Bray. According to the group’s site, Bray “was born in Yorkshire England to American parents while his father worked for the NSA. His family relocated to Jefferson, Pennsylvania at age 5. A dedicated patriot, Dave served in the U.S. Navy for four years as an 8404 FMF corpsman for 2nd battalion 2nd marines, and while at Camp Johnson in North Carolina, won the coveted Top Dog Award. Dave was the lead singer of the bands 1Echo1 and Soveren prior to becoming the front man for Madison Rising.” Also, according to the company’s site, “Madison Rising promotes the principles of liberty, independence, smaller government and personal responsibility. All tracks were recorded at Water Studios in Hoboken and mixed by legendary music engineer Ron Saint Germain at Saint’s Place Studio in Kinnelon, NJ.”  In the words  of Bray, “If you want to make history, you need to get involved now. Right now this country is bleeding. Right now our soldiers need to know we are an appreciative nation. Right now ignorance and apathy are running wild amongst our citizens. Right now we need a voice to unite us amongst the chaos. Right now we need to get people thinking about the issues that really matter. We hope Madison Rising can help. This is what Madison Rising is about.”

The interview is in two parts and can be heard in its entirety here.