By Harris Interactive, SPecial for US Daily Review.

It’s a complicated world for corporate America as consumer perceptions grow increasingly negative.  With the erosion of trust in corporate leadership, consumers have higher expectations and are demanding more information and transparency from companies with which they plan to spend their hard-earned dollars. 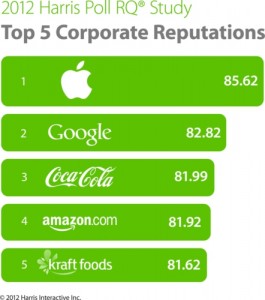 Through its 13 years, the Harris Poll Reputation Quotient (RQ) study has shown that the reputations of traditional manufacturers have fared well, though their overall visibility as an industry has declined; it also has indicated a rising affinity for technology companies.  Customer inclination towards strong leadership and technological innovation may be the catalyst, and it is within this environment that Apple reigns supreme.  This year regional brick-and-mortar retailers are more prominent, and many once-leading American companies are noticeably absent from the 2012 Harris Poll RQ study, which asks the general public to measure the reputations of the 60 most visible companies in the country.

This year’s most reputable brand, Apple, benefits greatly from its hybrid status as a technology/consumer product/retail company, and earns the highest RQ score to secure the top spot in the ranking.  It displaces Google — last year’s most reputable corporation, which now ranks second with an excellent score of 82.82.  The Coca-Cola Company, ranked 15th in 2011, has surged into third place, despite any meaningful change in its reputation rating.  Amazon.com moves up from eighth to fourth place and perennial reputation elite, Kraft Foods, ranked fifth.

“We are seeing the emergence of a group of companies that garner reputation equity by being positively associated with multiple industries,” said Robert Fronk, executive vice president and Global Corporate Reputation Practice Lead for Harris Interactive.  “Companies like Apple, Google, and Amazon.com combine innovation and leadership across multiple business areas, giving them true competitive advantage.”

In terms of year-over-year change, only Toyota, General Motors, BP, and Apple enjoy significant improvement in their RQ scores while one quarter of companies saw drastic declines.  Among those with the most significant declines, five were financial institutions, including the 2010 top scorer, Berkshire Hathaway.

RQ measures six dimensions that comprise reputation and influence consumer behavior.  Apple has the greatest score overall.  In fact, despite today’s challenging environment, Apple records the highest score in the RQ’s history, and is top-ranked in four of the six key dimensions of reputation:

Interestingly, Amazon.com, which has no storefront and very limited human interaction, scores highest in the Emotional Appeal dimension — this is the core strength of its reputation.  In terms of supportive behavior, customers report considerable confidence in Amazon.com and several other companies:

Scores of 80 and Higher are Rare This Year

An RQ score of 80 or above signifies a company with an “excellent reputation.” Since first measured in 2000, Apple has shown steady improvement, earning an elite score of 85.62 this year, the highest RQ score ever achieved by any company in the 13 years of the RQ study.

Reflecting the negative mood of consumers, this year only eight companies earn such scores. This is a 50% decrease from 2011, when 16 companies earned this privileged status.

“It’s quite striking to see such a drop in the number of companies scoring 80 or above,” said Fronk.  “Corporations are facing significant headwinds as they try to win and preserve consumer trust.”

Two automotive companies, each managing through unique reputation rehabilitation processes for different reasons, saw the greatest increases in their RQ scores this year.

General Motors’ reputation has been steadily moving upward for four consecutive years. Over the course of that time, the RQ study has seen its reputation rise 13 points and its ranking move up 14 places.  This year General Motors improves in all six RQ dimensions, and advances in the rankings due to dramatically higher perceptions in the Emotional Appeal and Vision & Leadership dimensions.

In the pharmaceutical space, Johnson & Johnson, plagued by recall and quality issues, manages to maintain a score over 80, though it fell from second highest ranked company in 2011 to seventh in 2012.  For the first time in RQ history, Johnson & Johnson did not rank in first or second place.

Meanwhile, the sudden appearance of brick-and mortar retailers like Best Buy, Costco, JCPenney, Kohl’s, Walgreens, and Macy’s on the most visible companies roster contrasts sharply with the absence of iconic U.S.-based manufacturers, like IBM and Intel Corporation.

A look back at the RQ most visible list from ten years ago also shows the dramatic change in the American corporate landscape. At that time, nine industrial manufacturers (excluding automotive) and six retailers made the list. This year’s list contains two companies in the industrial manufacturing space and is dominated by 14 retail brands, nearly one-quarter of the total list.

In charting the ten-year trajectory of individual companies, Apple and Hewlett Packard emerge as starkly different examples of how reputation management and behavior can impact perception.

Apple’s current dominance is built on strong investments in its brand, predominantly through its products and services.  This one-dimensional approach to building reputation has ultimately yielded high associations with all six reputational dimensions and ranks it first in Financial Performance, Products & Services, Vision & Leadership, and Workplace Environment.

Conversely, Hewlett Packard, which once out-ranked Apple, has headed in the reverse direction.  Hewlett Packard’s slowly eroding reputation has been injured by negative perceptions on Ethics and Vision & Leadership dimensions, and its brand is beginning to feel the damage.

At Risk Companies Skew to the Financial Industry

Over the lifespan of the RQ study, twelve companies have received scores below 50, and the vast majority of these, like Enron, MCI (formerly WorldCom), Adelphia, and Global Crossing, are now defunct.  The 2012 RQ survey shows the reputations of Bank of America, Goldman Sachs and AIG in an equally challenging place.  The general public believes that Bank of America has been more concerned with operational and financial recovery than with customers and rates the bank low in levels of trust, ethics, and customer service.  In order to rebuild their reputation, Bank of America will need to engage beyond this functional rebound.

In its 13th consecutive year, The Annual RQ surveys more than 17,000 members of the American general public, utilizing its proprietary Harris Poll online panel.  Respondents are first asked to identify the 60 most visible companies and then surveyed to rate these companies based on their reputation on 20 different attributes that comprise the RQ instrument.  The attributes are then grouped into six different reputation dimensions: Emotional Appeal, Products & Services, Social Responsibility, Vision & Leadership, Workplace Environment, and Financial Performance.  In addition to the 20 attributes, the study includes a number of reputation-related questions that help provide a comprehensive understanding of public perceptions.  The 2012 RQ survey was conducted from December 2, 2011 to December 19, 2011.

For more information on the 2012 Harris Poll Reputation Quotient® Study, as well as business services and products from Harris Interactive, visit www.harrisinteractive.com.

About Harris Interactive
Harris Interactive is one of the world’s leading custom market research firms, leveraging research, technology, and business acumen to transform relevant insight into actionable foresight. Known widely for the Harris Poll and for pioneering innovative research methodologies, Harris offers expertise in a wide range of industries including health care, technology, public affairs, energy, telecommunications, financial services, insurance, media, retail, restaurant, and consumer package goods. Serving clients in more than 215 countries and territories through our North American and European offices and a network of independent market research firms, Harris specializes in delivering research solutions that help us – and our clients – stay ahead of what’s next. For more information, please visit www.harrisinteractive.com.

Companies Scoring Below 50 are at Risk