On April 12, the Newseum will open a new exhibit, “Creating Camelot: The Kennedy Photography of Jacques Lowe,” as part of its year-long exploration of the life, legacy and death of America’s 35th president. The exhibit features intimate, behind-the-scenes images of John F. Kennedy, his wife, Jacqueline, and their children, Caroline and John, taken by Kennedy’s personal photographer.

The original negatives of nearly all of the 70 images displayed in “Creating Camelot” were lost forever in the terrorist attacks onSept. 11, 2001. Lowe, who died in May 2001, had stored his negatives of more than 40,000 Kennedy photos in a World Trade Center bank vault. All of the negatives in the vault were lost in the attacks, with the exception of 10 negatives out on loan at the time.

Part of our 9/11 Anniversary Coverage.

The only existing images from the lost negatives were on Lowe’s contact sheets and prints, which fortunately had been stored in another New York City facility. The Newseum, working closely with the Lowe estate, digitally restored the images to museum quality for the exhibit. Imaging technicians in the Newseum’s exhibits department digitally scanned the surviving contact sheets and prints, which were never meant to be used in place of negatives for printmaking, and spent more than 600 hours working to remove scratches, dust and other blemishes from the images. The restoration work creates a comprehensive digital archive of Lowe’s Kennedy photographs and enables the Newseum to exhibit the photos at a resolution and size at which they have never before been seen.

A touch-screen monitor in the “Creating Camelot” exhibit will allow visitors to view more than two dozen of Lowe’s original contact sheets, including the editing marks that indicate which images Lowe selected for publication in various newspapers and magazines. 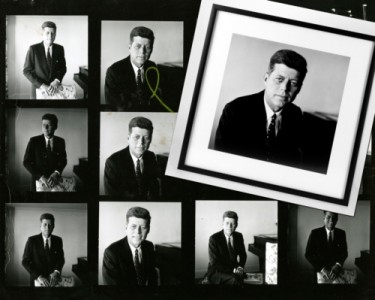 “Lowe’s photographs helped shape Kennedy’s image in the news media and in the public’s imagination,” said Cathy Trost, vice president of exhibits and programs. “Thanks to his unprecedented access during the presidential campaign, he was able to supply candid and intimate family images to the press, which had never before been used to that extent in politics.”

Lowe was 28 when he met the Kennedys in 1958 and was hired as the family’s personal photographer. Over the next three years, he shot more than 40,000 images of the couple and their children. Lowe’s photos span from Kennedy’s 1958 U.S. Senate re-election campaign through his early years in the White House. The iconic images helped create the legend of the Kennedy presidency that later became known as Camelot.

The exhibit opens in conjunction with another JFK exhibit, “Three Shots Were Fired,” which examines how the news media reported the events that began with Kennedy’s assassination in Dallas on Nov. 22, 1963. A Newseum-produced film about Kennedy’s presidency and family life in the White House, “A Thousand Days,” also will premiere on April 12.

Nikon is the exclusive sponsor of the “Creating Camelot” exhibit. Premier sponsorship support for “Three Shots Were Fired” has been provided by Altria Group and CBS.